As per the report, the Wi-Fi enabled devices fell marginally to around 48%, and the uptake for 4G and 3G devices, after a decline, witnessed a rise. 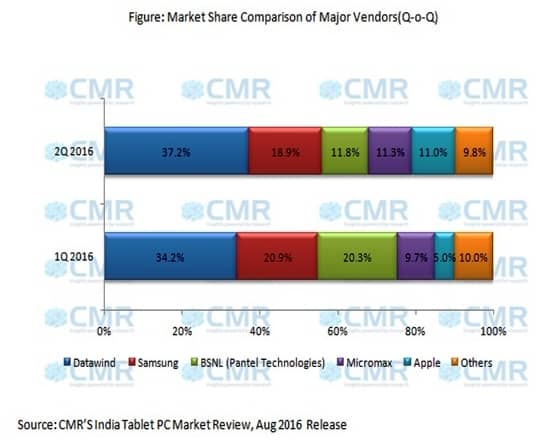 Apple showed its stupendous performance with over 100% rise sequentially, hinting towards an uptake in CXO purchases. Increased inclination towards i-Pads may help the tablets space to see a turnaround in the near future. Brands lining up for 4G foray also likely to contribute significantly to the tablets market.

Commenting on the tablet market, Krishna Mukherjee, Analyst at CMR, said: “The tablets market has been witnessing a fall for quite some time now. Even the number of vendors in this segment has also declined. However, during the second quarter we saw multiple vendors inking agreement for enterprise or institutional purchase which is of course a good sign. With increased CXO–level purchases, and enterprises evincing their interest, we can’t deny the fact that may be few years down the line the tablet space may see a turnaround.”

According to Amit Sharma, Analyst, CMR, “It’s time to watch whether the Chinese players create the same magic which they created in the smartphones space. Although, there are few players in the tablet market today, but again, it is a huge opportunity for them to enter this segment and rekindle the market with the right technologies, strategies, among others. From smartphones, 4G is now seeping into tablets and in a similar manner; we may also see the Chinese players diversifying to this domain.”