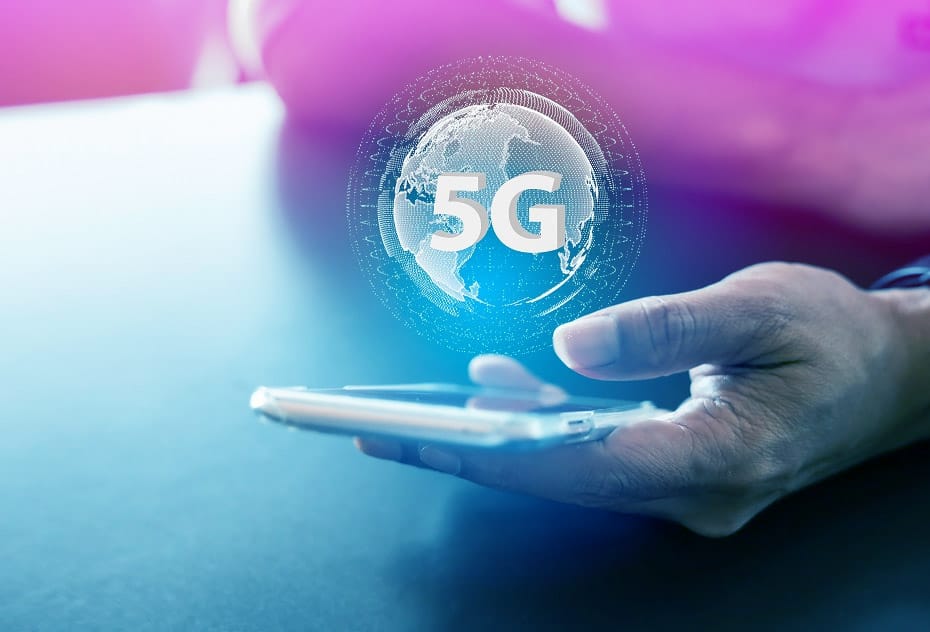 According to Menka Kumari, Analyst-Industry Intelligence Group, CMR. “5G smartphone shipments posted a robust growth in Q1 2022. The overall smartphone market has posted a considerable growth of 16% compared to the pre-pandemic levels of Q1 2019. However, the smartphone industry continues to face major headwinds, including prevailing supply side dynamics, and resultant raw material shortages. While the initial two months of the quarter remain muted, March bucked the trend, with growth picking-up.” 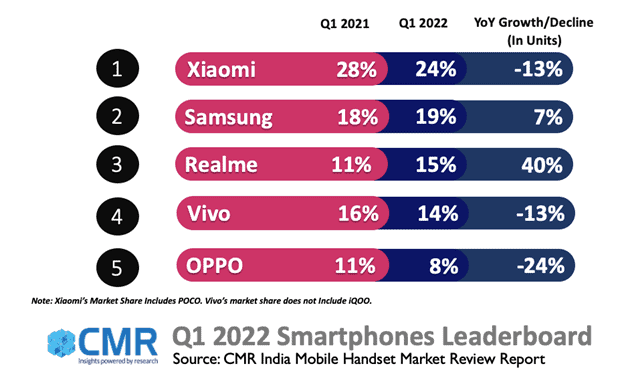 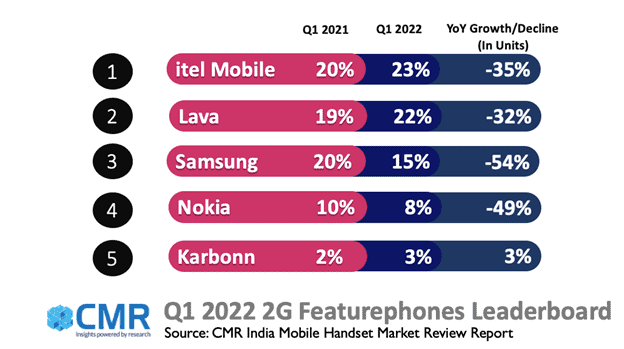 Xiaomi captured the top spot with 24% market share. Redmi 9A Sport and Note 11 were the most popular models. Xiaomi’s shipments declined by 13% YoY owing to tough competition. Its sub-brand Poco recorded a 52% YoY decline in its shipments in Q1 2022.

Samsung was placed second with 19% market share in the smartphone market overtaking realme. Samsung topped the 5G smartphone leaderboard with its new 5G offerings including the Samsung F23, Samsung A23, amongst others. Samsung was NO 1 in 5G Value for money Price Band(7000-25000K).

Realme was placed third with 15% market share with its shipments growing 40% YoY, the most amongst the top five players. realme C11(2021), realme 9i and realme C21Y were the top selling models and accounted for most of realme’s market share.

Vivo garnered 15% market share along with its sub-brand iQOO. The vivo Y72 and vivo Y75 models accounted for the bulk of its 5G shipments.

OPPO was placed fifth with 8% market share. The OPPO A54 and A16 series were highest shipped models. OPPO captured 5% share in the overall 5G shipments.

“Going forward in Q2 2022, CMR estimates point to a potential 5-8% YoY growth in smartphone shipments. We anticipate H2 2022 to potentially see some easing of supply-side constraints. Consumer demand at the premium smartphone end will continue to remain robust, with demand remaining muted at the affordable end of the market,” added Menka.