At 0.91 million units, Tablet Shipments grew sequentially at 7% in Q1

Datawind led the market with its share at 34.2%, posting a sequential growth of 37%, followed by Samsung at 21%. Pantel (BSNL) was at the third position with 20% market share during the period. 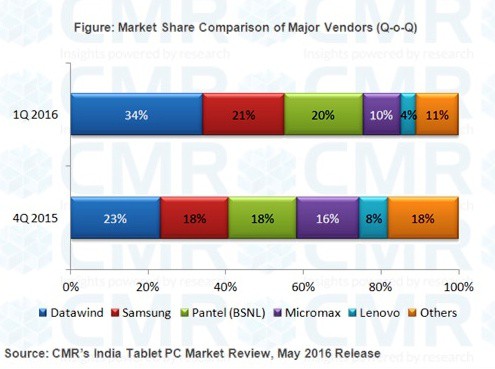 Commenting on the tablet market, Krishna Mukherjee, Analyst at CMR, said: “A number of steps such as free Internet bundling, tie-ups with e-commerce players helped Datawind to secure the number 1 position. Mass production for its enterprise buyers and increased online presence were also some of the factors helped it to beat Samsung as the Korean player mainly focuses on more than 30k segment only, resulting in low sales.”

According to Tanvi Sharma, Analyst, CMR, “Increased demand for smartphones with larger screen sizes has resulted in a marginal growth of the tablets market. Also, consumers are demanding tablets under 5K price band and there are wafer-thin margin for vendors. Unlike smartphones, tablets are not easily up-gradable and this is their major drawback.”