The 3Q’2017 for Mobile Handset Industry in India continued to reaffirm the dominance of feature phones in the India market, accounting for 53% of the overall market pie. The highly competitive smartphone market witnessed interesting trends, with Xiaomi leveling with Samsung at the top of the leaderboard for the first time, fueled by an impressive 84% growth.

Since the beginning of 2017, mobile handset vendors have shipped around 200 million mobile handset units in India. The smartphone market recorded 29% sequential growth in 3Q 2017, with 37.5 million units shipped, on the back of the festive season sales. Alongside, promotional offers on online and offline channels contributed to the growth.

Commenting on the major trends witnessed, Prabhu Ram, Head – Industry Intelligence Group (IIG), CMR said, “3Q 2017 witnessed the continued leadership of Samsung in mobile handset shipments with a 22% market share, and a comfortable 11% lead over Xiaomi. 3Q also witnessed Indian mobile handset manufacturers offering bundled entry-level feature phones (Reliance Jio LYF), which was later replicated by its competition in the entry-level smartphone segment. We anticipate this trend to increase in 4Q, resulting potentially in an increased market share for Indian brands. This would also lead to consolidation of handset vendors in sub-INR 5K smartphone segment. It remains to be seen how this move will benefit Indian brands in countering the Chinese dominance.”

“Interestingly, Xiaomi recorded 84% sequential growth in 3Q 2017 to be on par with Samsung in smartphone shipments. However, Xiaomi’s future growth will be dependent on its offline channel strategy to counter competition. 3Q also saw the return of Nokia to the top 10 mobile handset brands list, with its growth fueled by its feature phones,” Narinder Kumar, Analyst, CMR-IIG.

“While 4Q will see the introduction of several marquee flagship brands, the India market will continue to be driven by the affordable (INR <7K) and value for money (INR 7K-25K) segments. We anticipate a modest uptake for marquee brands in the initial run.” Prabhu added.

In 3Q 2017, 4G smartphones grew sequentially by 37%, dominating the market with a 96% market share. In comparison, 3G smartphones saw a sequential decline of 27%. 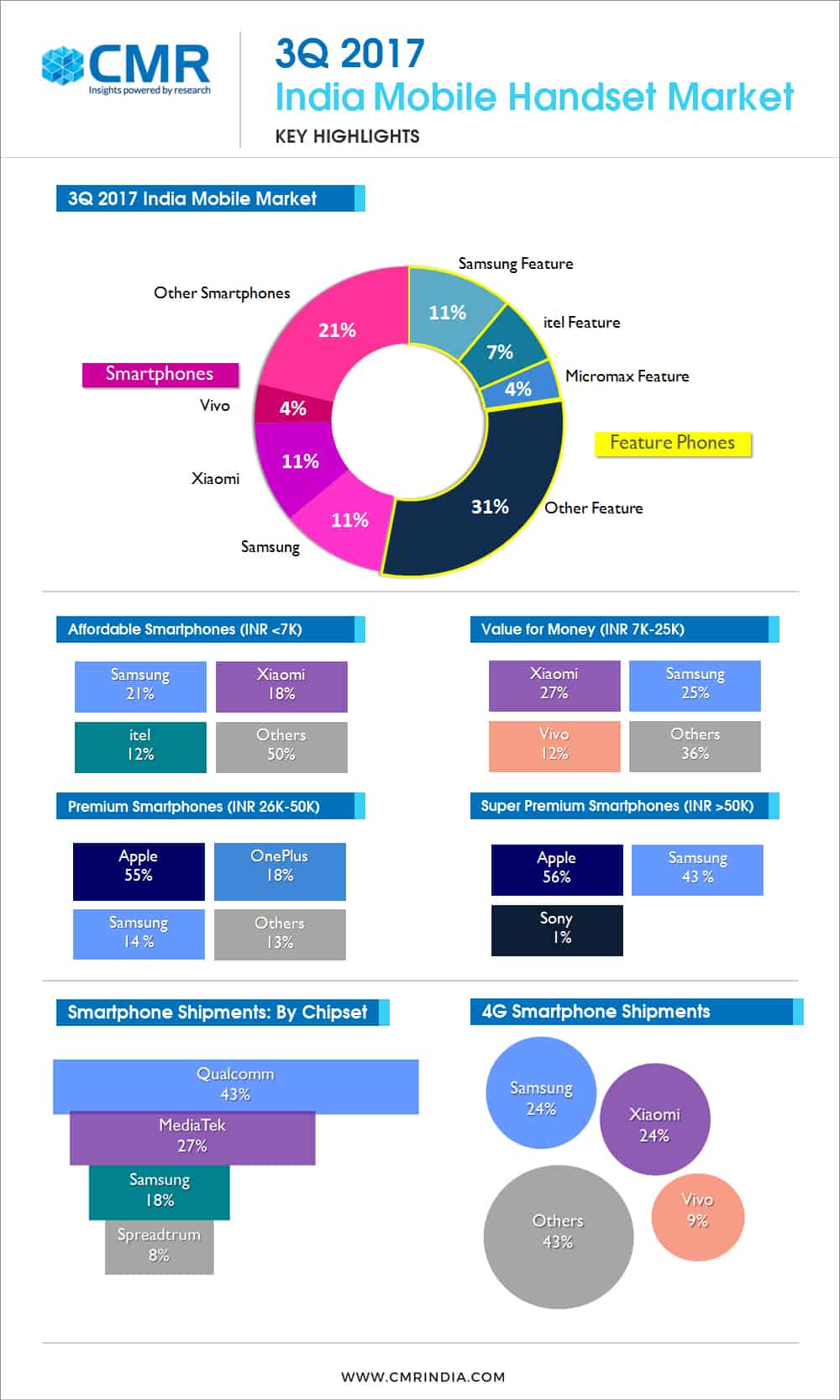