Despite Stiff Challenges in Q2 2020, India Smartphone Market on path to potential recovery in H2: CMR 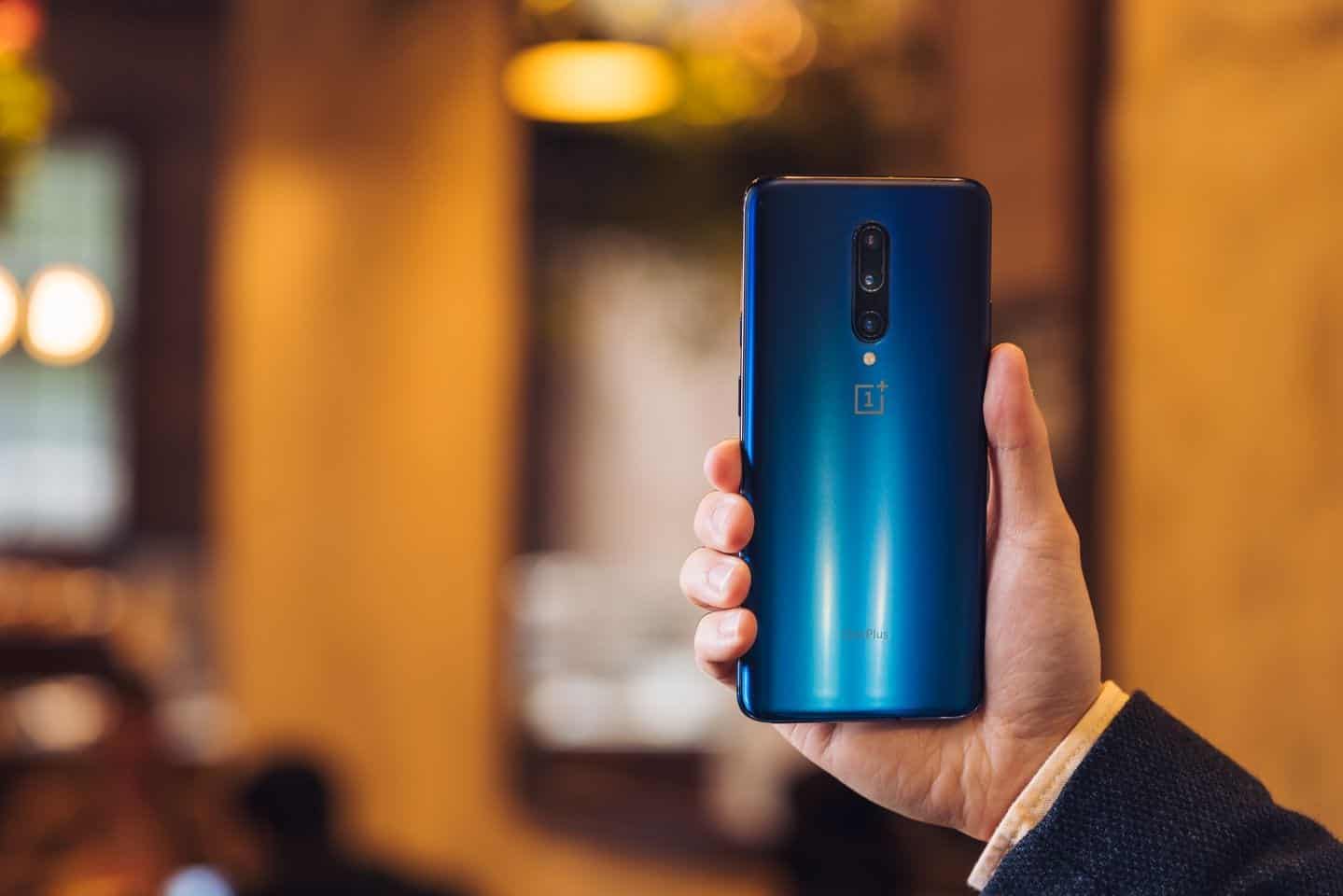 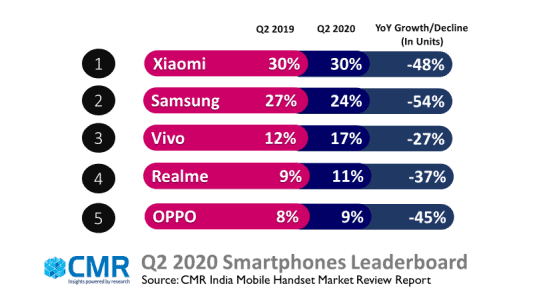 The Road to Recovery for Feature Phone Segment remains Uncertain

As a consequence of the pandemic, the consumers at the bottom-of-the-pyramid are the worst-hit economically. The return to pre-COVID levels for feature phones segment remains elusive, as consumers put off their discretionary purchases. 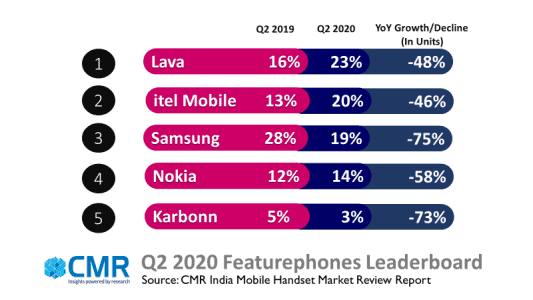 Xiaomi remained the market leader with 30% market share in smartphones.It’s Redmi 8A Dual, Redmi 8 and Redmi Note 8 together contributed to >60% of its overall shipments. Xiaomi launched its first 5G enabled smartphone, Mi 10.

Samsung captured 24% market share due to its good supply side dynamics leading to increase in its market share by 8% QoQ. However, Q3 will be the real test to demonstrate whether Samsung’s demand side is gaining momentum. Samsung Galaxy M11, A21S and A31 contributed to almost 50% of its overall shipments.

vivo’s market share in Q2 remained flat at 17%. Its V and Y series were most popular.The Y17 and Y91i along with newly released Y50 contributed to more than 55% of its overall shipments.

Realme, for the very first time, witnessed a 2% QoQ decline in its market share. Smartphone models, such as realme C2, realme C3, realme 5i and the newly launched,Narzo series, together contributed to three fourth of realme shipments in Q2 2020.

OPPO market share declined by 3% QoQ. Its 5th position in the leader board was driven by import of smartphone models, such as A31, A1k and the newly launched, A12. OPPO also launched its first 5G model in India, the Find X2.

OnePlus introduced its 5G enabled smartphones, OnePlus 8 and 8 Pro. Both the models contributed to one third of its Q2 shipments and three fourth of all 5G shipments in Q2.

Transsion Group (comprising of brands such as Tecno, itel and Infinix) witnessed a marginal QoQ decline of 3% in its market share. Some of the new smartphone models launched by them, included Tecno Spark 5, Spark Power 2 and Infinix Hot 9 series.

Over the short-term, CMR believes the mobile market will improve in mid-Q3, spurred by early online sales fests, setting the smartphone market on a potential path to recovery towards the all-important festive season. During this period, smartphone brands will focus on showcasing their consumer-centric value propositions, focusing more on hyper local delivery models, and launching more 5G-ready smartphones. CMR’s current estimates point to a better performance for the India smartphone market in H2 2020, with market anticipated to recover by >40%, in comparison to H1.

“The path to potential recovery will be led by pent-up consumer demand, driven by need for upgrades. In the run-up to the festive season, consumers will seek to go for meaningful value propositions, that bring devices and compelling content ecosystem offerings, together. This coupled by smartphone brands bringing more value for money offerings, backed by aggressive messaging, will potentially drive the market,” added Amit.

Thus far, a key challenge for the smartphone market in India to grow has been the inability to offer value propositions that will help feature phone users to migrate to smartphones.

“We believe recent announcements, such as the Jio-Google deal, augur well for the future of the mobile handset industry in India, and in potentially enabling the migration of feature phone to smartphone users, with its focus on driving affordability,” added Anand Priya Singh, Analyst, Industry Intelligence Group, CMR.