According to Shipra Sinha, Analyst, Consumer Storage Flash Memory Market, “The Micro SD Cards are the largest contributor to the consumer storage flash memory market and therefore, the growth of large internal memory mobile phones has influenced the sector a lot. Lot of price variations among the branded products resulted in the stocks accumulation in 2Q CY 2017, this became one of the major factors of decline of overall Consumer Storage Flash Memory Market in 2Q CY 2017”.

“The sales were largely affected especially in June 2017 because of current Modi Government’s plan to introduce Goods and Services Tax (GST) in July 2017.The plan to launch GST forced the brands to buy very limited stocks which they could sell in that same period. Hence GST became the second most important factor of decline of Consumer Storage Flash Memory Market in 2Q CY 2017,” Shipra added.

In the overall India Consumer Storage Flash Memory market, SanDisk continued to be the most favored vendor. However, its market share decreased from 50% in 1Q CY2017 to 41% in 2Q CY2017.
Strontium grabbed the number two position and Sony captured the number three spot in terms of unit shipments in 2Q CY 2017. 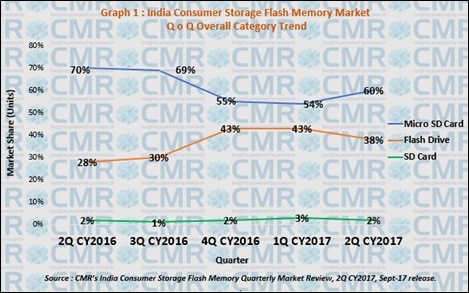 4 GB was the major contributor with 30% market share of the overall flash devices market in 2Q CY2017. This was because of the increase in the unit shipments of Unbranded 4 GB Micro SD cards in 2Q CY 2017. 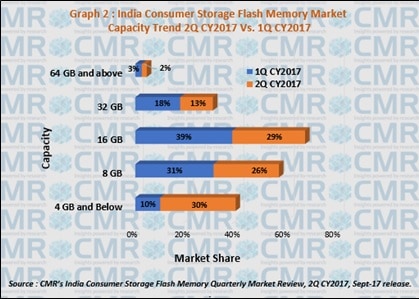 According to Shipra, “Lucrative offers floated by different brands during the forthcoming festive season, sellers buying the usual stocks after the dust being cleared around GST will pace up the sales in coming quarter. Streaming and downloading videos, entertainment and gaming apps, and other apps consuming large memory space, would further drive the further growth of Micro SD in the near future. Going forward the market will witness a shift towards higher capacity segments because of almost all major vendors moving towards implementing 3D Flash Technology in their manufacturing process.”