The Dataquest-CyberMedia Research e-Readiness Assessment of Indian States 2013 revealed that Delhi, Kerala, Goa, Gujarat and Andhra Pradesh had topped the rankings in the overall planning, implementation and outcomes generated from their IT policy initiatives, administrative reforms and roll-out of e-Governance programmes. 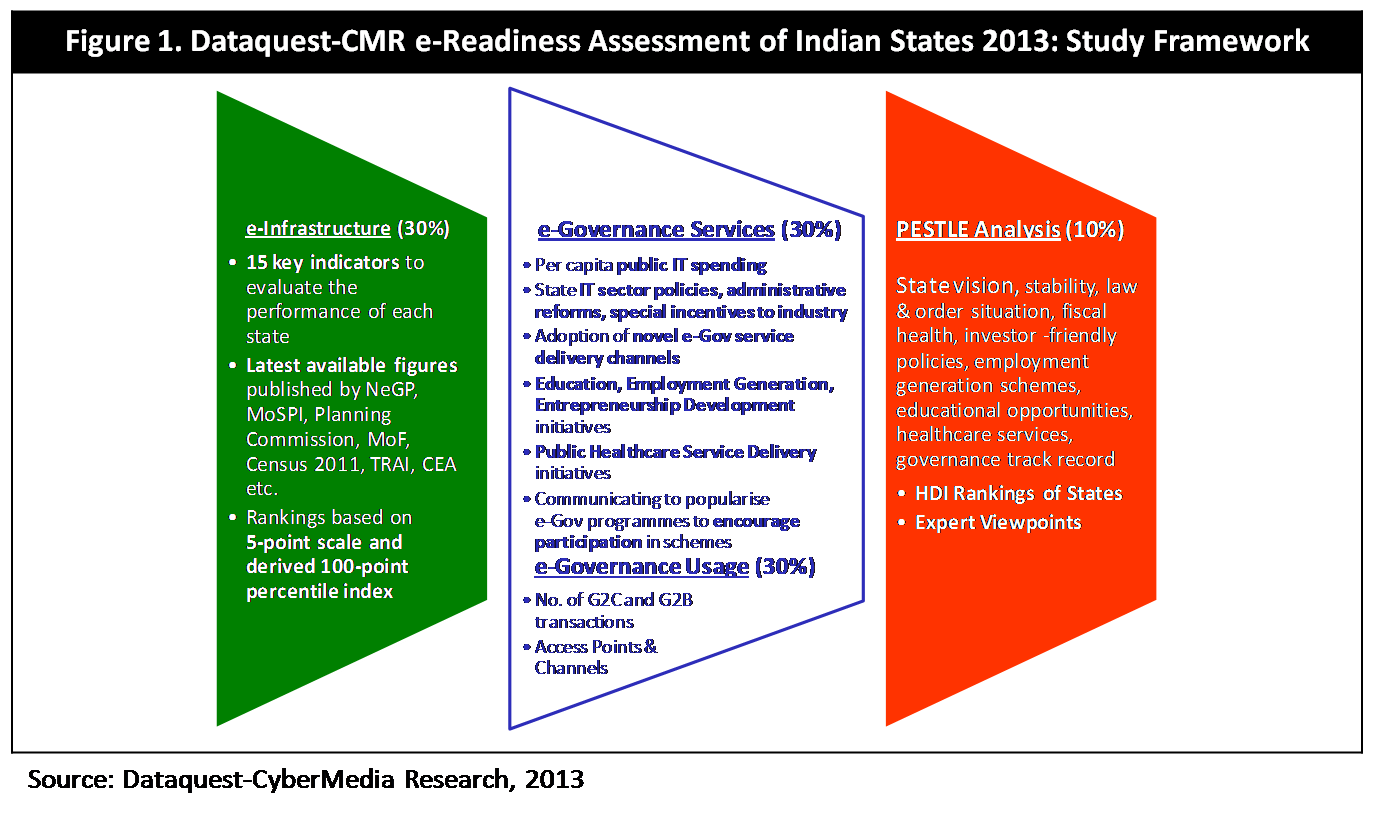 “Close to 66% of India’s population is currently under the age of 35 years. This means that the aspirations and wants of the current generation of Indians are very different from those of their parents’ or grand parents’ generations. The advent and widespread adoption of Information Technology, particularly the Internet and mobile telephony have added a completely new dimension to the awareness and expectation levels of Indians from all walks of life”, stated Ibrahim Ahmad, Group Editor, Dataquest.

“Rising expectations and wants of citizens are forcing Central and state governments to devise schemes and programmes that can speedily and efficiently deliver the benefits of good governance to a large proportion of the population in a transparent manner. In this scenario, ICT comes as a ‘boon’ by enabling reliable, secure and affordable access to welfare projects for citizens living in remote corners of the country”, opined Thomas George, Senior Vice President and SBU Head, CyberMedia Research.

“Starting with the National e-Governance Plan, the Central and state governments have rapidly put in place core IT infrastructure such as SWANs, SDCs and CSCs. The focus has now shifted to providing easy, safe and affordable access to public welfare programmes through the deployment of robust ‘middleware’ gateways such as NSDG, SSDG, MSDG and ‘front-end’ delivery channels like Mee-Seva, e-Suvidha or Lok Mitra Kendras, state and national portals, and software tools to monitor the performance of CSCs and other service delivery channels”, Vishaal concluded.

As per government estimates, the total budget for National e-Governance Plan (NeGP) is estimated to be of the order of US$ 9.7 billion. As per the Dataquest-CMR study, Goa (INR 644 per person) and Chhattisgarh (INR 367 per person) emerged as the highest per capita spenders on public IT infrastructure among small and large states, respectively for the 24-month period ended 31st March 2013.

The event witnessed attendance by senior bureaucrats and policy-makers from the Centre and states.

The winners received their awards from the country’s e-Gov pioneer, Mr. R. Chandrasekhar, former Secretary, Department of IT and Department of Telecommunications, Govt. of India and President designate, NASSCOM.
A CMR analyst delivered a brief overview of the survey findings at the Summit. Copies of the Executive Summary of the Dataquest-CMR e-Governance Assessment of Indian States 2013 Status Report were shared with attendees.

Cyber Media Research Ltd., an ISO 9001: 2008 company, is an institutional member of the Market Research Society of India (www.mrsi.in) and senior CMR analysts are individual members of ESOMAR, the World Association for Market, Social and Opinion Research (www.ESOMAR.org).