“Traditionally contact smart cards have played a crucial role in defining the growth of the market.  However, in the coming years we expect to see a major shift towards contactless and hybrid smart cards,” said Anirban Banerjee, Associate Vice President, Research and Advisory Services, CMR.

The CMR India Smart Cards MarketIMG, 2011-2015, September 2012 identifies the prominent factors responsible for the growth of the smart cards market in India as: 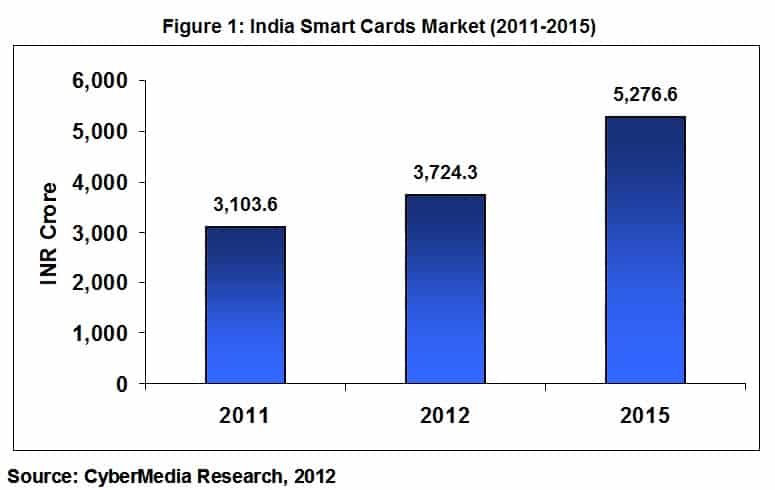 “The UID / Aadhar Scheme, Rashtriya Swasthya Bima Yojana (RSBY), National Rural Employment Guarantee Scheme (NREGS) and Public Distribution System (PDS), Driving Licence, e-Passport and e-Visas are some of the government projects that are likely to boost market growth. The need for secure and safe financial transactions is also catalyzing the smart cards market in India. Consumers’ shift towards plastic money is regarded as key factor in the growth of this segment”, pointed out Faisal.

According to the CMR India Smart Cards MarketIMG, 2011-2015, September 2012, the trends that would be increasingly visible in the coming years in the India smart cards market include:

“A majority of the smart cards that are used in the country today are imported. Players like Gemalto, Oberthur, Sagem Morpho and Giesecke & Devrient are popular foreign smart card brands in India. In the coming years, we expect domestic manufacturing of these cards, to bridge the gap between demand and supply. The Government of India is also encouraging local players to manufacture smart cards within the country. Further, foreign players have started to set up facilities in India to bring the cost of these cards further down”, Rajat concluded.