Commenting on the results, Faisal Kawoosa, Lead Analyst, CMR Telecoms Practice said, “We had cautioned the industry that unless they make substantial differentiation in the value proposition for potential customers, Tablet shipments are not going to grow. This is what the results now reinforce.”

“Since there isn’t much value addition coming in the shape of specific solutions to enhance device usability at the moment, Tablets are only becoming devices of convenience, essentially larger screen versions of smartphones. This has resulted in lower priority in the list of ‘must have’ devices for the average user. Tablets only make the ‘nice-to-have’ grade.  To prevent the Tablet form factor from dying out, vendors must position their offerings as a distinct category, rather than just an also ran device at the cusp of a Smartphone and a Laptop PC,” Faisal opined. 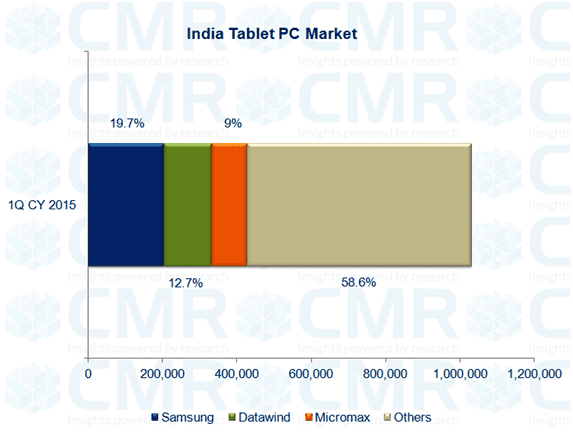 Echoing similar views, Sachin Mehta, Analyst for Tablet PCs at CMR, said “We were hoping that the future of Tablets lies in the enterprise market and that is why we saw many mainstream IT brands aggressively launch their Tablet devices in CY 2014. Unfortunately, that momentum has not picked up. The situation calls for vendors to go back to their drawing boards and redesign the product.”

“The challenge that enterprise CIOs are facing in the adoption of Tablets is that the device does not completely act as a replacement and adding accessories such as a keyboard make it just another Laptop PC. In this scenario, Tablets are just going to end up being CxO companions, in which case I see only Apple having a bright future,” Sachin concluded.