4G Smartphone and Datacard shipments grow at 157% and 107%, respectively; Tablets decline by 7%

Samsung leads the market with 30% share of devices, emerging as the largest 4G Smartphone brand

25 brands ship 4G handsets; Asus makes an impressive start figuring in the ‘Top 10’ in the first quarter of launch

New Delhi/Gurgaon: According to CMR’s India Quarterly LTE (4G) Device Market Review, August 2015 release announced today, the total LTE device shipments in the country reached 5.7 million units during 2Q (April-June) 2015, continuing the momentum of doubling in shipments for the second consecutive quarter. The 4G devices shipped during the period continued to be predominantly Smartphones with 97% contribution in terms of units. 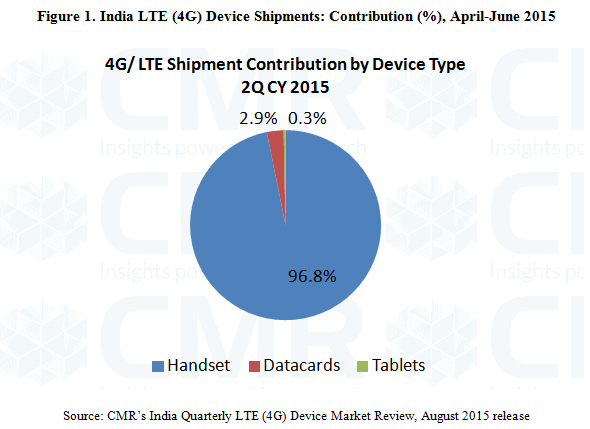 Commenting on the findings, Faisal Kawoosa, Lead Analyst, CMR Telecoms Practice said, “As per earlier estimates, we expected that India would ship 5 million 4G Smartphones a quarter by the fourth quarter of CY 2015.  But, with the current trend of doubling of shipments every quarter, we can now realistically expect that number to be in the vicinity of 10 million; in that event total 4G device shipments in the country should cross 11 million units per quarter by the end of this calendar year.”

“This is mainly happening due to four factors – reputed brands launching their LTE devices, for instance, smartphone vendors like Asus; vendors going beyond online sales and venturing into ‘offline’ stores, such as Xiaomi; players adding more models to their existing 4G portfolio like OnePlus, and the recent full blown launch of 4G services by Airtel, which enables users to actually use their devices for such a feature”, Faisal added.

The number of players in the India 4G/LTE device segment increased from 19 in 1Q (January-March) 2015 to 25 during 2Q (April-June) 2015. Most of the big brands reflected an increase in their 4G/LTE shipments during 2Q CY 2015, except Apple and OnePlus whose shipments declined as also their market shares.

Samsung maintained its leadership in the India 4G/LTE smartphone segment in 2Q (April-June) 2015, further increasing its market share from 24.5% in 1Q (January-March) 2015 to 30% in terms of units shipped. Lenovo gained significantly and was behind Samsung with a 21.8% market share, Xiaomi rounded off the top three players with 17.1% market share.

Micromax is still looking to make its presence felt in this segment – the Indian vendor’s share of unit shipments declined from 10% in 1Q 2015 to 6% in 2Q 2015. However, 2Q 2015 proved to be a fruitful quarter for Sony, which was able to garner a market share of 5% owing to good traction of its Xperia M4 and E4 models. Other major brands like Intex, Karbonn, Asus and others also entered the segment with new offerings.

Commenting on the market leaders, Vikrant Singh, Analyst, CMR Telecoms Practice said, “The best selling handsets in the 4G/LTE segment were the A6000 from Lenovo and Redmi2 from Xiaomi. This indicates that the India market is being propelled by shipments of devices in the INR 6-10k price range.”

One area which still remains untapped is the Tablets market, where R&D and new product launches have been subdued of late. As the 4G market grows, more users are expected to feel the need for a bigger screen; hence, Tablet manufacturers should stay focused on this segment for the long run.

As the country’s 4G/LTE ecosystem evolves CMR expects the demand for devices that support faster data networks to rise significantly.

“Consumers are eagerly awaiting growth and maturity of 4G service offerings. We feel it is only fair to expect that in a year’s time the India market could see a strong transition happening towards 4G devices”, stated Faisal Kawoosa.

“India brands contribute just over 8% of total 4G devices being shipped in the country as of 2Q CY 2015. Since growth in 4G device shipments is primarily coming from low- to mid-range priced devices, this gives Indian brands – already established in this space – an opportunity to strengthen their standing”, Vikrant added.