Within the India A4 Printer market, the inkjet printer segment grew sequentially by 26% in terms of unit shipments during 3Q CY 2014 over 2Q CY 2014. The inkjet multifunction printer category was the leading growth catalyst, which witnessed 33% growth in 3Q CY 2014 when compared to the previous quarter.

“With growing acceptance in the SOHO, Home and SMB segments, this category is likely to be one of the critical drivers of India A4 Printer market growth in the future”, Narinder added. 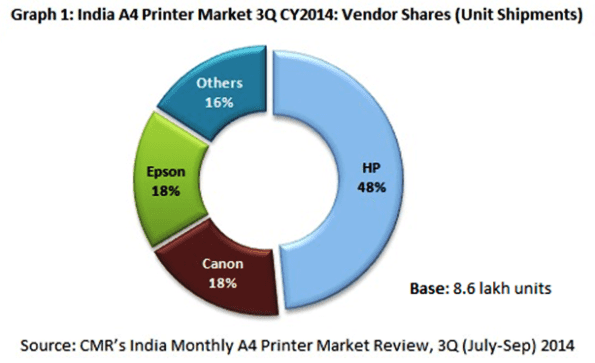 “Post the formation of a new government in 2014 with a clear majority, the macro-economic signals for the Indian economy have remained strong. This had a trickle-down effect on consumer sentiments along with price stability in the market. Improved spending from the government and corporate segments, along with likely growth in demand from SOHO and SMB segments is expected to provide a further upward swing to the India A4 Printer market“, added Sumanta Mukherjee, Lead Analyst, InfoTech and Channels Practices, CyberMedia Research.