End of the festive season marked the decline of the overall market in 4Q CY2017. Micro SD and Pendrive categories witnessed 15% and 23% decline respectively in terms of units shipped in 4Q CY2017. Alternatively, SD Cards recorded huge 83% growth predominantly because of the wedding season in 4Q CY2017

In the overall India Consumer Storage Flash Memory market, SanDisk continued to be the most favored vendor and contributed 50% market share in terms of units shipped. However, the vendor shipments witnessed 18% decline as compared to the last quarter. Sony and Strontium were other leading players. These top three players collectively made 65%contribution to overall consumer storage flash memory market. 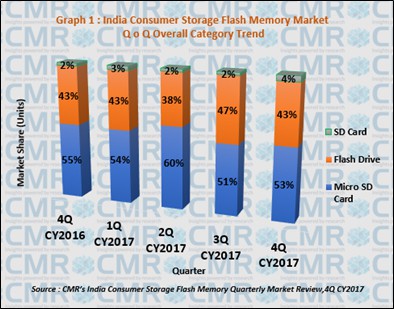 SanDisk remained the top contributor with 37% market share in 4Q CY2017. The vendor shipments however witnessed 17% decline when compared to the last quarter. Strontium maintained its second position and Samsung was at the third spot in 4Q CY2017 in terms of unit shipments. Shipments of Unbranded Micro SD declined by 6% when compared to the last quarter.

SanDisk was market leader with 63% market share in 4Q CY2017. Sony was at second position and Strontium captured the third spot in 4Q CY2017 in terms of unit shipments. Among the top ten Flash Drive models, SanDisk’s Cruzer Blade (SDCZ50) and Ultra Dual Drive (SDDD3) were the most favored models in 4Q CY2017. 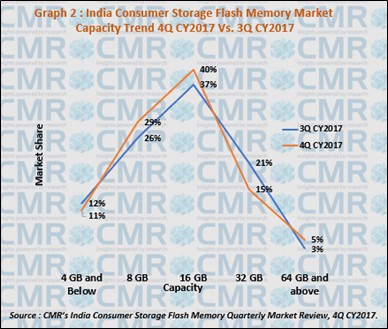 “Heavy memory consuming apps for various entertainment activitie in the smartphones, will keep the demand for Micro SD cards in the near future. However, growing trend of large internal memory smartphones will be a hindrance which will be offset by growth of entry level budget smartphones. The market will witness a shift towards higher capacity segments in coming quarters. Application Performance Class Standards 5.0 will be implanted in future which will specify a card to be fast enough to be used for starting apps and programs. Demand for dual Pen Drives providing hassle free data transfer between mobile and laptop at one go will also rise. With the start of the new year first quarter is expected to see an upward trend in sales. SD cards will continue to rise in the first quarter due to the wedding season,” Shipra concluded.

CMR uses the term “shipments” to describe the number of consumer storage flash memory devices leaving the factory premises for OEM sales or stocking by distributors and retailers. For the convenience of media, the term ‘shipment’ is sometimes replaced by “sales” in the press release, but this reflects the market size in terms of units of consumer storage flash memory devices and not their absolute value. In the case of flash memory devices imported into the country, it represents the number leaving the first warehouse to OEMs, distributors and retailers.