“This clearly points to the growing acceptance and adoption of a ‘digital lifestyle’ by the Indian consumer, which has good long term implications for the overall growth of the ESDM sector in the country,” stated Narinder Kumar, Lead Analyst, InfoTech and Channels Practices, CyberMedia Research. 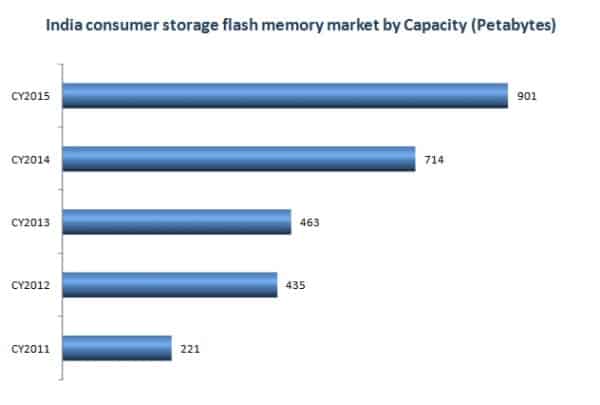 In the overall India Consumer Storage Flash Memory market SanDisk remained the top vendor with a 37% market share in 4Q CY 2015 in terms of unit shipments.  Samsung was at number two spot, followed by Strontium at number three position. One of the key reasons for the market revival is that shipments of unbranded MicroSD cards recorded 143% hike quarter-on-quarter versus a 48% decline in the previous quarter. The ‘Top Five’ branded vendors contributed to two-thirds of overall shipments in 4Q CY 2015.

While suppliers of unbranded MicroSD cards were mainly focused on 4 GB and 8 GB capacity, the established players moved up the value chain to 8 GB and above.

“Overall CY2015 ended below expectations. While 2Q CY 2015 was affected by imposition of anti-dumping duty on Pen drives, a large influx of grey market MicroSD card units in 3Q CY 2015 hampered the growth in shipments during the second half,” Narinder further added.

“CY 2016 is expected to be better than CY 2015. Growth in MicroSD cards due to a growing base of 3G and 4G smartphones will be a key driver of growth of the market. However, the recent imposition of additional customs duty on  imports in 1Q CY 2016 is likely to slow down the growth  engine temporarily, particularly for  suppliers of branded cards,” Narinder concluded.