According to Shipra Sinha, Analyst, Consumer Storage Flash Memory Market, “The stocks of 2Q CY2017 getting cleared in July 2017 increased the sales in all the three product categories. August and September 2017 saw a similar trend in sales because of the festive season.”

In the overall India Consumer Storage Flash Memory market, SanDisk continued to be the most favored vendor and contributed 51% market share in terms of units shipped. The vendor shipments witnessed 67% growth as compared to the last quarter and was the major growth driver for the pen drive category.
Strontium maintained its number two position and Sony stood at number three in terms of unit shipments in 3Q CY2017. 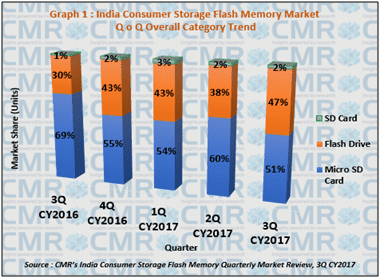 SanDisk remained the top contributor with 38% market share in 3Q CY 2017. The vendor shipments witnessed 81% growth when compared to the last quarter. Strontium maintained its second position and Samsung was at the third spot in 3Q CY 2017 in terms of unit shipments. Shipments of Unbranded Micro SD declined by 18% when compared to the last quarter.

SanDisk remained the top contributor with 65% market share in 3Q CY 2017. Sony was at second position and Strontium captured the third spot in 3Q CY 2017 in terms of unit shipments. 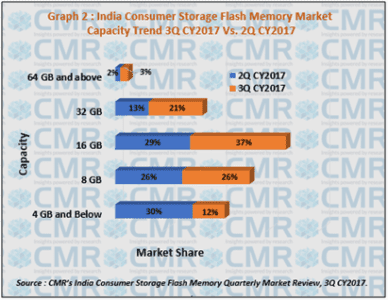 According to Shipra, “Availability of several apps for watching movies and other entertainment shows online, downloading videos etc. require additional internal memory. This will further drive the growth of Micro SD cards market in the near future. Going forward, the market will further witness a shift towards higher capacity segments. This is due to all major vendors implementing 3D Flash Technology in their manufacturing process. Demand for Dual Pen Drives, providing hassle free data transfer between mobile and laptop at one go, will also rise. We anticipate the Fourth Quarter to be slow.”