“Telecom service providers have been under extreme pressure after the entry of the Reliance Jio Infocomm. On the back of its continuous launch of affordable internet plans along with its MiFi devices at exceptionally competitive prices, Jio grew aggressively during the festive season in the second half of CY2017. The service provider market underwent consolidation, and witnessed exit of Uninor and Tata Indicom in CY2017,” observed Shipra Sinha, Lead Analyst, CyberMedia Research.

In terms of technology, 4G/LTE data cards made 99% contribution with impressive 255% sequential growth in CY2017. 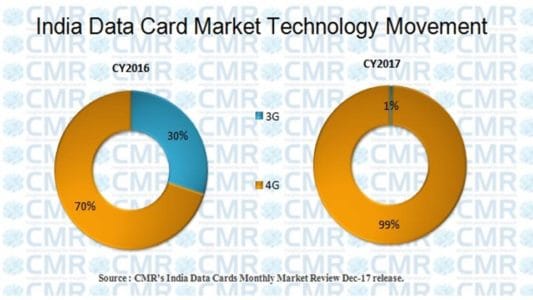 Reliance Retail continued to maintain its number one position in the overall data cards market. Its JioFi devices captured 85% market share in CY2017 as against 38% in CY2016. In terms of unit shipments, it recorded a five-fold sequential growth in CY2017. Huawei was at number two spot, with a 7% market share and 29% sequential decline in CY2017. Data card shipments from other vendors, including iBall, Intex, and Micromax registered continuous decline. As a result, they gradually moved out of market by the end of CY2017. Reliance Retail’s fast moving JioFi models captured the top five spots. 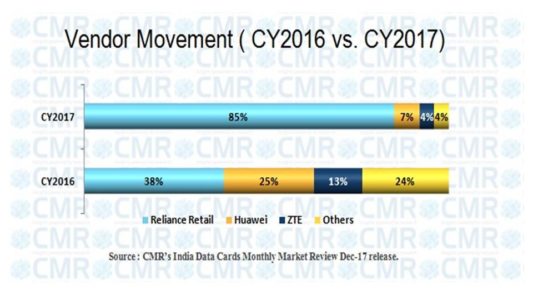 “LTE/4G based MiFi devices have potential to provide superfast internet at low cost with multiple user support will continue to contribute to its leadership position. The rising acceptance of Mi-Fi’s, primarily driven by Reliance Retail in Tier II and Tier III cities will make way for this device category to continue to expand to major parts of India. 1Q 2018 is expected to witness good sales with the introduction of new Reliance Retail’s JioFi models accompanied by its cost-effective internet plans.” Shipra concluded.