‘Make in India’ potential of domestically sourced handsets stands at 62.4%* to overall sales

According to the CMR’s India Monthly Mobile Handsets Market Review, CY 2014, February 2015 announced today, the India mobile handsets market grew at 4% in terms of shipments over CY 2013, to touch 257 million units during the period. Of this 77 million were Smartphones accounting for nearly 30% of all shipments, a first for India.  The Smartphones segment grew at 46% vis-à-vis CY 2013.

3Q CY 2014 proved to be the peak quarter in terms of sales correlating with the festive sentiments in the market. 28% of all mobile phones were sold in this quarter.

Summing up the results, Faisal Kawoosa, Lead Analyst, Telecoms Research at CMR said, “2014 proved to be a path-breaking year for the India mobile phones market, essentially in terms of the high proportion of Smartphones shipped. A lot of consumer enthusiasm was seen in terms of launch of new phone models and brands, unique features and a significant change in sales strategies of vendors. This resulted not only in making available a wider set of options for buyers, but also challenged industry players to remain competitive as well as creative in their offerings.”

Samsung emerged as the overall leader in the India mobile phones market during CY (January-December) 2014, with a 16.5% share of shipments, followed by Micromax and Microsoft (Nokia) at 13.3%. However, Samsung was seen to be losing its earlier firm grip on the market, as its share of the market showed a downward trend during the year, as compared to Micromax that gained primarily in 2Q (April-June) 2014, but then continued to remain flat during the rest of the year. 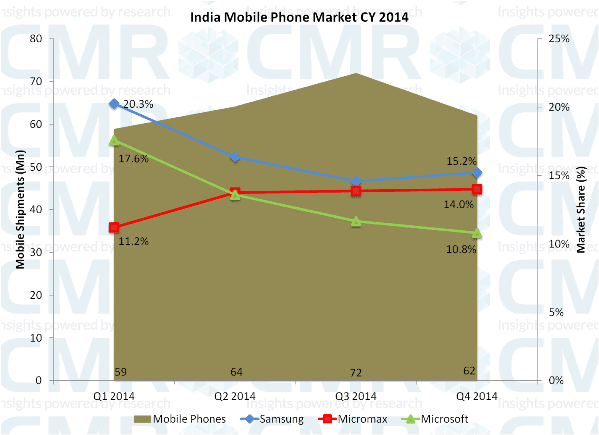 Smartphones saw the strongest growth in India in the year 2014. This growth was propelled by a number of reasons, the main being availability of wide range of models and brands under ₹15,000, pickup in online sales, increasing mobile data consumption and decline in data tariffs plus operators extending their data network footprints. While many new brands emerged in the India market, the focus continued to be on offering the best experience at the right price-point.

Commenting on the India Smartphones market, Karn Chauhan, Telecoms Analyst at CMR, said “With Smartphone penetration reaching a new high, leading brands vied with each other to provide the highest levels of selling experience. Going forward, the challenge would to provide customers equally high levels of after-sales experience across the length and breadth of the country. This will call for a deep focus and investment on improving distribution and servicing networks.”

“Some of the new Smartphone brands rely exclusively on online sales and it would be interesting to watch how they go about increasing their market footprint, to penetrate deeper into upcountry locations. Such expansion would help them reach a large base of potential buyers without easy access to online platforms,” Karn further added. 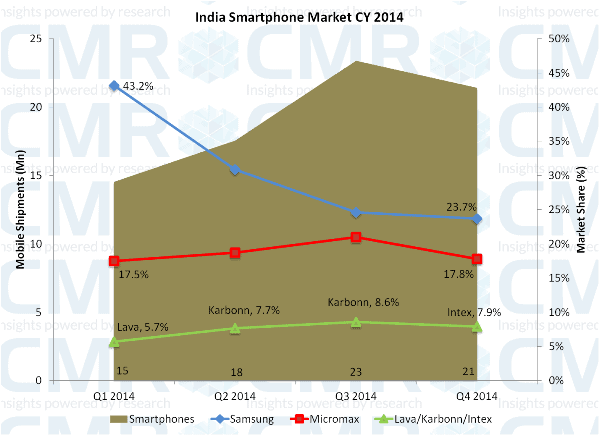 In the India Smartphones segment, of the ’Top Three’ leadership positions the 1st and 2nd are held by Samsung and Micromax, respectively.  Samsung saw a considerable fall in its market share, primarily at the hands of Apple gaining in the premium segment and a plethora of Chinese brands/OEMs hitting the mid-range Smartphones segment.  Micromax was able to retain this market share in Smartphones throughout the year despite stiff competition at the hands of Chinese brands/OEMs and a few Indian brands. The 3rd spot in the India Smartphones segment was not held firmly by any single brand, with Lava, Karbonn, and Intex vying for this position through the year.

* ‘Make in India’ brands are all domestic brands and Samsung’s domestic production.