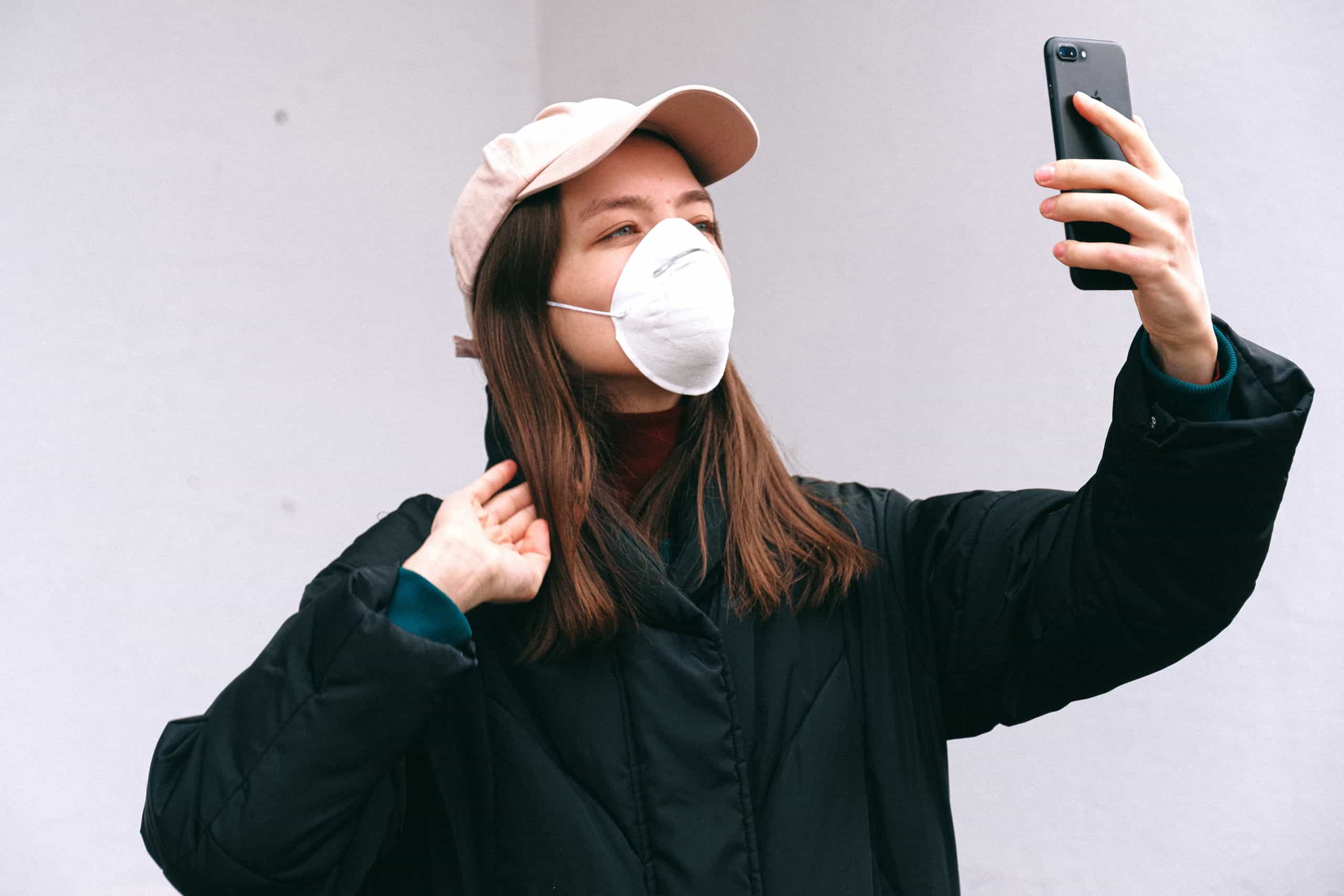 New Delhi/Gurugram, 12 Feb 2021: According to CMR Mobile Handset Market Review Report for Q4 2020, the India smartphone market grew 20% YoY in Q4 2020. Xiaomi captured 27% market share to be the No.1 Smartphone brand in Q4 2020. On the other hand, Samsung continued to gain strength, and led the overall mobile handset market in CY2020, capturing 19% market share.

According to Anand Priya Singh, Analyst-Industry Intelligence Group (IIG), CMR, “For the Indian smartphone industry, the year 2020 was a remarkable story marked by response, recovery and resilience in the face of the persistent pandemic. As a consequence of the supply chain and geo-political challenges, the year saw a gradual realignment of smartphone supply chains. Enterprises seeking to de-risk themselves from China looked at emerging alternatives, including India. As we move forward, we believe India’s smartphone manufacturing ecosystem will get a fillip, and gain strength in the post-pandemic future.”

In 2020, 5G shipments continued to gain strength and we anticipate this momentum to continue in 2021. OnePlus was the highest contributor in the 5G smartphone segment capturing 58% market share followed by Apple at 20%.

According to Amit Sharma, Analyst-Industry Intelligence Group (IIG), CMR, “On the back of the growth momentum in Q3 2020, the smartphone market continued to gain strength in the run-up to the festive season and beyond in Q4 2020. Amidst the pandemic, the smartphone industry growth was positively impacted by the pent-up consumer demand driven by the persistent work-from-home, learn-from-home, and unwind-at-home conditions. Smartphone brands were able to turn around the story in H2 2020. As a consequence, the smartphone market saw a mere 3% decline for the full year.” 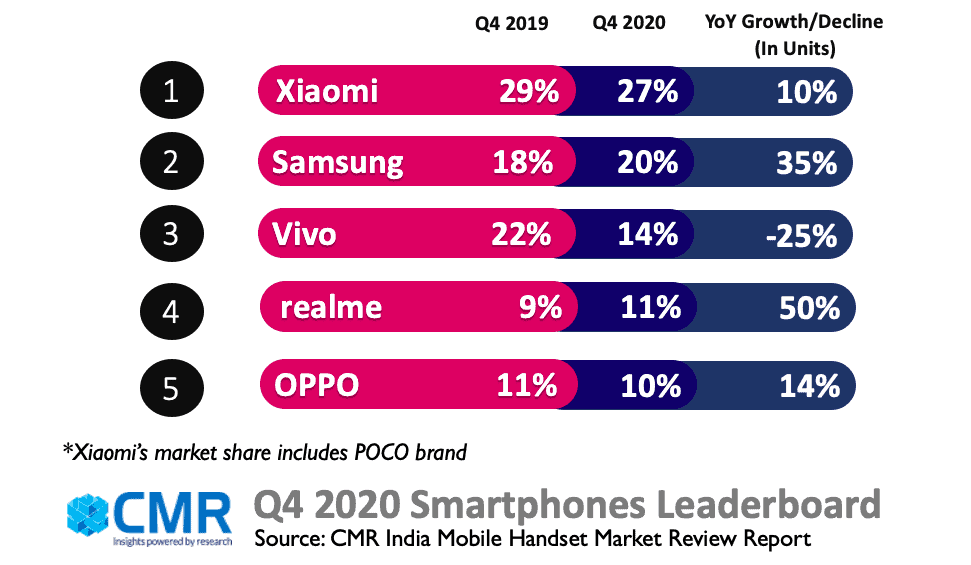 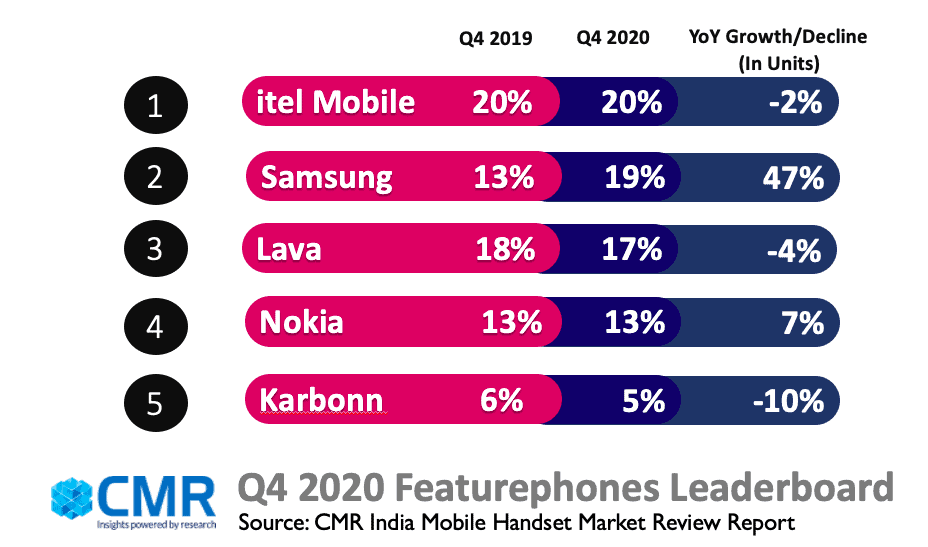 Samsung recorded 35% YoY growth. Samsung’s affordable model, Galaxy M01 Core  along with A21S and A51 models contributed more than 45% of its smartphone shipments. Samsung stood at the second spot in featurephone segment as well capturing 19% share.

Vivo declined by 25% YoY. The vivo Y20 series and Y1s contributed almost 40% of its overall shipments. It introduced a plethora of new phones by launching 8 models and its second 5G phone Vivo V20 Pro.

realme shipments recorded a remarkable 50% YoY growth, mostly driven by the realme C series, including the realme C11, realme C12 and Narzo 20 series. They contributed more than 50% of its shipments.

OnePlus shipments recorded a significant growth of 177% YoY. The OnePlus 8 and OnePlus Nord accounted for 76% of its Q4 shipments. OnePlus contributed more than half of the overall 5G shipments in Q4 2020.

Apple continued its remarkable growth story and was placed sixth on the top ten smartphone leaderboard. Apple led the smartphone market accounting for 90% of all the eSIM-enabled smartphones in CY2020. Apple’s remarkable growth in CY2020 will continue in the year ahead, on the back of its online store, offline retail forays, and aggressive marketing launches.

Among the niche brands, despite its uncertain future, LG shipments recorded an exceptional 210% YoY growth.

As per CMR estimates, the smartphone market in 2021 will potentially grow >10% YoY.  5G shipments is expected to grow tenfold to >30Mn, even though the 5G network will not be available until late 2022 or early 2023.