New Delhi/Gurugram, 13 Dec 2021: The Tablet market in India witnessed an outstanding 116% quarter-on-quarter (QoQ) growth in Q3 2021 mostly driven by continued consumer demand in the run-up to the festive season. Alongside, commercial demand picked-up during the quarter, especially in healthcare and education sector. According to CMR’s Tablet PC Market Report Review for Q3 2021, Lenovo led the tablet market with 47% market share.

According to Menka Kumari, Analyst-Industry Intelligence Group (IIG), CMR, “The earlier-than-usual online festive sales helped tablet makers to cater to the continued consumer demand arising from learn-from-home and unwind-at-home routines. The quarter also saw the debut of new market entrants, such as realme, entering the fray with their tablet offering, the realme Pad. This debut augurs well for the overall tablet industry.  For current market incumbents, especially in the affordable tablet segment, the enhanced competition will be something to watch for.” 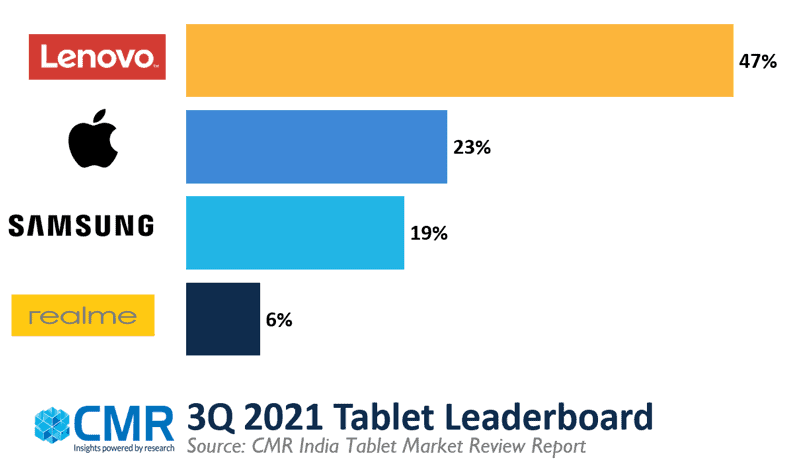 CMR anticipates the tablet market to grow around 4% in Q4 2021, with the festive sales.

“The current supply side dynamics, including chip shortage, will potentially pose challenges for Tablet OEMs. However, we believe Tablet brands will be able to navigate these challenges, and the overall Tablet market will continue to maintain its growth curve in Q4 2021,” added Menka.