India Tablet PC shipments at 3.89 million units in CY 2014; half the devices sold are 3G Tablets

Market witnesses a dip of over 9% in shipments; 3G tablets buck the trend to grow at an impressive 43.5% year-on-year

New Delhi/Gurgaon: According to the CMR’s India Annual Tablets Market Review, CY 2014, February 2015 release announced today, the country’s tablets market saw a decline of 9.2% in terms of shipments over CY 2013, with shipments touching 3.89 million units during the period. Of this 1.93 million were 3G Tablets, accounting for 49.7% of all shipments. The 3G Tablets segment grew at 43.5% vis-à-vis CY 2013.

Sharing the highlights of the report, Faisal Kawoosa, Lead Analyst, CMR Telecoms Practice said, “The incumbent, early mover brands managed to maintain their leadership positions during the year, but the market seemed to signal movement along a different trajectory. Enterprises contributed about 21% of the total tablet PC shipments in India during CY 2014. This, coupled with availability of Windows based solutions helped mainstream players like Lenovo, HP and Dell make strong inroads into this device category.”

“So, while 2015 is a challenging year for players like Samsung, Datawind and Micromax, it is equally going to throw up a challenge to Google to maintain its dominance through Android OS and not lose out to Microsoft Windows, as the enterprise adoption of Tablets picks up further,” Faisal cautioned. 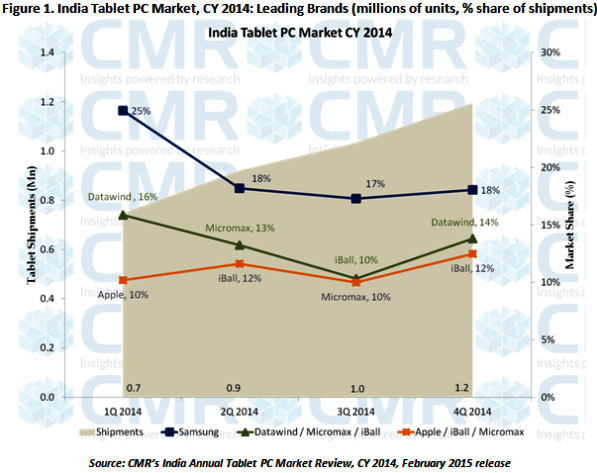 Sachin Mehta, Analyst for Tablet PCs at CMR, expressed concern over the declining trends in Tablet PC shipments in the consumer segment.

“Tablet PC adoption had moved at a fast pace in India and the trend continued for a few years. Industry players expected this phenomenon to build up further, but were caught unprepared by the success of Phablets, that were largely responsible for cannibalising Tablet sales in 2014. The challenge posed here for Tablet designers is to speed up innovation and stop offering just ‘a large screen size smartphone’. The space needs to be re-invented, preferably in the Indian context. Certainly, content consumption needs to be the focus whether it is for entertainment, gaming, education or personal productivity.”

“One of the possible ways of differentiating Tablets is perhaps for industry to discontinue the production of 7-inch devices, to give target buyers a noticeable difference in look-and-feel, compared to Phablets that are essentially of the order of 5 to 6 inch screen size. This move may affect the market for some time, as the 7 inch form factor still contributes 72% of sales, but will serve the cause of the product category in the long run,” Sachin concluded.