CyberMedia Research (CMR) announced the results of its “India Tablets Consumer Usage and Adoption Trends 2013” study, in which it asked 3,600 respondents (including 1200 non-users) across the country how they prefer to use their Tablets and what they want most from their Tablet usage experience. 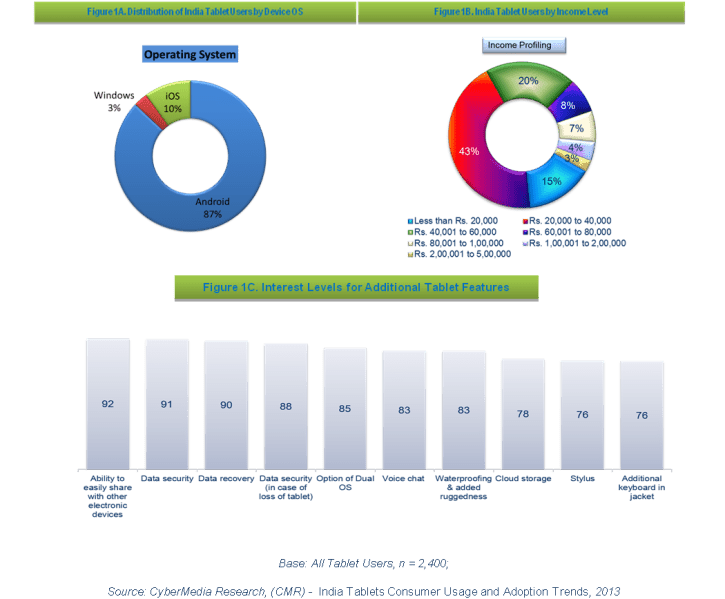 Sumanta Mukherjee, Lead Analyst, InfoTech and Channnels Practices added, “Consumers are driving segmentation of the market away from one-size-fits-all models toward different devices available at distinct price points. Interestingly, satisfaction seems to peak for tablets in 5000 to 10000 price range as well as 20,000 and above price bracket.”

Apalak Ghosh, Lead Analyst, Emerging Technologies Research, CMR remarked “A growing desire for choice in functionality, price and device ecosystem supported by attractive combinations of size and other features are what customers are looking while deciding on their choice of devices.”

CMR’s “India Tablets Consumer Usage and Adoption Trends 2013” study was conducted across 20 cities covering a sample of 3,600 respondents including both users (2,400) and non-users (1,200) of Tablets during the months of September, October and November 2013. Face-to-face interviews were conducted with respondents aged 13 to 55 years. The study was aimed at identifying triggers and barriers for purchase and use of Tablets, and to understand key trends of Tablets usage and need-gaps prevalent in the market.

Cyber Media Research Ltd., an ISO 9001: 2008 company, is a member of the Market Research Society of India (www.mrsi.in) and senior CMR analysts are enrolled with ESOMAR (www.ESOMAR.org).