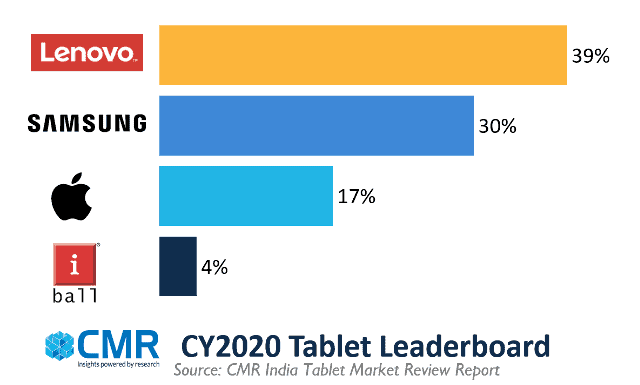 New Delhi/Gurugram, 4 March 2021: According to CMR’s Tablet PC Market Report Review for CY2020 released today, Lenovo reigned India’s Tablet PC Market. While the Tablet market grew 6% year-on-year (YoY), 4G Tablets grew sequentially by 7% YoY. Interestingly, during the course of the year, a premium brand such as Apple replaced a strong value-for-money brand such as iBall in the top three brands.

Samsung was placed second in the market leaderboard with 30% market share. Samsung launched several Tablets in 2020, including the Tab A7 LTE & WiFi version, Tab S7, S7 Plus & S6 lite. Across all the tablet launches from Samsung, the Tab A7 LTE & WiFi was the most successful, accounting for a massive 13% share across the Samsung tablet portfolio.

Apple replaced iBall at the third position for CY2020 with 17% market share. As uncertainties owing to COVID-19 pandemic continue to persist, Apple has a good opportunity to increase its market share in the overall tablet market. With launch of Apple iPad 8, iPad Air and iPad Pro contributed to this market growth with 44% of the overall iPad shipments during this year. Apple registered strong growth in CY2020. It also had the largest share in the premium segment (> INR 30,000). Apple iPad demand spiked through CY2020.

CMR anticipates an overall growth of shipments around 5-10% in CY2021, with a slower than expected Q1 2021 due to muted consumer demand.

“In CY2021, we anticipate the Tablet market to start on a slower note. This is primarily because much of the consumer demand was fulfilled in the festive season. However, we anticipate the tablet demand to pick-up in Q2 2021 driven by the education sector, and digital transformation in the post-vaccine world,” added Menka.

1. This release is based on the CyberMedia Research (CMR) India Quarterly Tablet PC Market Review published at the conclusion of every calendar quarter.
2. The figures captured are of both enterprise and consumer shipments.
3. CyberMedia Research (CMR) uses the term ‘shipments’ to describe the number of Tablets leaving the factory premises for OEM sales or stocking by distributors and retailers. For the convenience of media, the term ‘shipments’ is sometimes replaced or used interchangeably with “sales” in the press release, but this reflects the market size in terms of units of Tablets and not their absolute value. In the case of Tablets imported into the country it represents the number leaving the first warehouse to OEMs, distributors and retailers. CyberMedia Research does not track the number of Tablets brought on their person by individual passengers landing on Indian soil from overseas destinations or ‘grey’ market Tablets (if any).