Lenovo-owned smartphone maker, Motorola has unveiled its 2018 edition of the Moto G6 series, in two variants, the Moto G6, and the Moto G6 Play, featuring 18:9 displays in sync with current market trends, and aimed at providing users with a more immersive experience.

On the back of the 2017 Moto G5 series, the new budget smartphones come with major design upgrade, and some minor spec play, featuring an 18:9 aspect ratio and glass design among others. While the Moto G6 features a dual-camera setup, the Moto G6 Play has a single rear camera sensor. The price begins at Rs 13,999 for the Moto G6 base model, and Rs 11,999 for the G6 Play. Moto G6 and Moto G6 Play will be exclusively available on Amazon India and Flipkart respectively.

The new Motorola launches come at an opportune time for Motorola. In the last year, it has seen its market share in smartphones erode. According to research from CMR Mobile Handset Review, Motorola’s market share in smartphones in India declined to 3% in 1Q 2018. Interestingly, if we were to consider Motorola’s performance in the INR 10,000-15,000 price band, Motorola has consistently ranked 4th in CY2017, improving to rank 3rd in 1Q 2018 (as per CMR data). 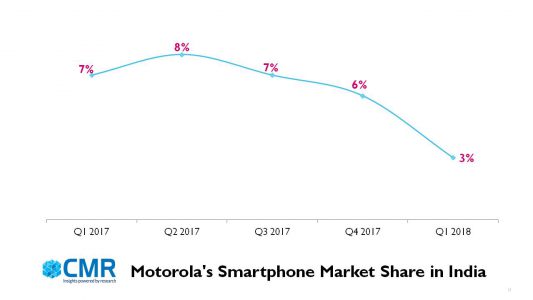 The Competitive Landscape for Motorola

When the first G series smartphones were launched, Motorola did well promising premium features at affordable prices. While it has been able to sustain itself thus far, the state of play for mid-range smartphones in 2018 is a different ballgame altogether. There are strong competitors such as Xiaomi and Asus, as well as new entrants such as Nokia and RealMe offering superior features at similar, and even lesser pricepoints.

Where does Motorola get it wrong?

The pricing of Moto G6 is a big letdown. The G6 is powered by Snapdragon 450, whereas many of its competitors at similar or lesser pricepoints come with Snapdragon 636.

The new Moto G6 comes with Android 8.0 Oreo, under Motorola’s stock Andorid UI. On the other hand, competing brands, including Xiaomi, Asus and Nokia offer Android One, or at similar pricepoints.

While the Camera has seen some improvements over the G5 edition, it does not have the firepower that other competitors offer, whether it be a Asus Zenfone, or a Xiaomi Redmi Note 5 Pro.

The Moto G6 may make sense for loyal Motorola fans wanting to go for an upgrade or replacement. For others, there are plenty of other attractive brands at the same or lesser price points offering better specs.