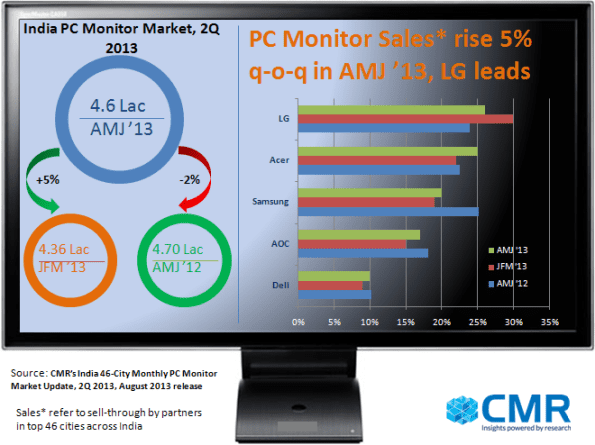 Price Increase: The fall of the Indian Rupee vis-à-vis the US Dollar and other major currencies, which has further accentuated in recent weeks, stoked fears of inflation and spread fear of a crisis among investors and the partner community. The tumbling rupee forced vendors to increase prices ahead of the festive season. Samsung and LG took the lead and increased their prices between 3-4% and 5%, respectively in 2Q 2013, while Acer raised prices at the fag end of the quarter. Samsung managed demand with partner incentives. However, LG remained the most affected with their market shares declining by 4% in 2Q 2013 vis-à-vis 1Q 2013.

Parallel Imports: Large volume of parallel imports for Samsung and LG, hitting the Northern India and Western India markets resulted in a steep decline in sell-throughs in 1Q 2013, impacting Samsung, in particular. Samsung did manage to recover some of the lost ground and recorded a growth of 9% in sell-throughs in 2Q 2013 vis-à-vis 1Q 2013. Effective front-end sales incentive schemes enabled partners to bring down prices for Samsung monitors despite the price increase; this tactic also helped to close the window for parallel imports.

According to Sumanta Mukherjee, Lead Analyst, CMR InfoTech and Channels Practices, “Decline in parallel imports of PC Monitors and typical market behaviour saw partners stock more units before the impending price hike on imports due to sharp depreciation of the Rupee. These two reasons were largely responsible for the growth in PC Monitor sell-throughs in India during the April-May-June 2013 quarter.”

The Continuing Tussle between Assembled PC vs. Branded PC: The price difference between assembled PCs and branded PCs have been continually narrowing and an increasing number of consumers are opting for significant benefits offered by branded PC vendors such as extended warranty. With an increasing number of branded players in the marketplace, assembled PC shipments have grown at a relatively slower pace. While the assembled desktop PC market has declined rapidly over the past two years, most partners are hopeful that the decline will be arrested, and the next two years may see a flat market. This scenario could provide some relief for channel partners and vendors with high stakes in the assembled PC industry.

“Tier-2 and Tier-3 towns have a demand pattern where Indian consumers recycle old PCs or upgrade them in order to make effective use. Homes, schools, colleges and SMB enterprises in these geographies still prefer the assembled PC, as it offers a combination of customised configuration, the benefit of affordable price-points and upgrade options to meet future needs, and most importantly getting support from a local partner”, Sumanta added.

“The gaming segment remains a bright spot for PC assemblers as well as for branded PC players”, Sumanta concluded.

The Shape of Things to Come: Innovative Technology to build excitement, capture consumer mindshare and brandshare

During 2Q 2013, AOC revamped its portfolio with an increased focus on Android-based products to spur growth. The vendor introduced an Android smart PC Monitor and an Android AIO. LG too added a new product line-up in the Monitor TV and Touchscreen Monitor range in 2013, with which it hopes to give tough competition to other incumbents.

“As the fate of the standalone PC Monitor market continues to be entwined with the declining assembled PC market, vendors have started introducing technology innovations, including ones which free up the monitor from the PC to some extent, as in the case of monitors running the independent Android TV app”, stated Maninder Singh, Analyst, CMR Channels Practice.

Size Does Matter: The new size 19.5″W monitor is the new bright spot being focused by vendors in 2013. 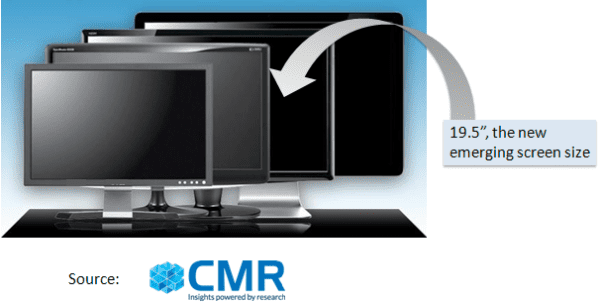 Touchscreens: With the advent of touchscreen functionality and innovations such as gesture recognition supported by Microsoft’s Windows 8.1 OS, monitor vendors are getting an avenue to bring in major innovations in terms of form factor. This includes touchscreen kiosks, table-top gaming stations etc. The success of this trend for the standalone PC monitor market will depend on the adoption rate of the new MS Windows 8.1 platform by users. 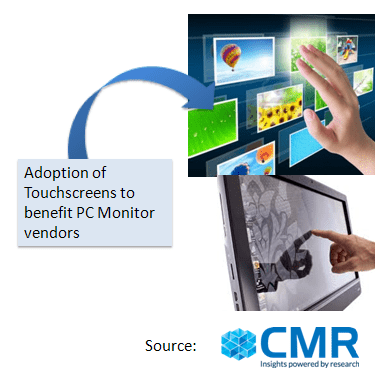