A 200 million-plus subscriber basket of small players! Well, that sounds like a pool party. But who amongst the large players in the telecom sector would jump? First?

A staple conversation between two love birds can easily fit into a strategic brawl between the big cheese names of an industry. Someone will have to disconnect. Because this is now an industry that is going through the consummate stage that management gurus love to sprinkle in their models every now and then – the inevitable consolidation phase.

Only this time, and with the telecom sector – this stage was long due.

More so here than anywhere, a company’s long-term success hinges on how well it ascends and keeps a grip around the industry consolidation curve. Speed is everything, and those companies that evaluate their strategic and operational rope-walks on this curve, timely and without naps, are often able to equip themselves with headway in such phases.

Sounds familiar a challenge for the Indian telecom industry, doesn’t it? Specially with those unrelenting and slippery trends that the last few years have subjected many players to. While some telecom services providers did cherry-pick their targeted acquisition hunts as they weighed in spectrum footprint, subscribers base, cost leverage and revenue market share astactical advantages; they, nevertheless,face headwinds like reduced IUC, increasing capex on account of data-centric network rollouts and rising competitive landscape with new and aggressive entrants like RJio. Collateral damage: many small and slower firms which are eventually becoming acquisition targets and are likely to disappear when the dust of this storm settles. So those companies that are still trying to avert the strategic skirmish would just not survive the upcoming carnage.

For that’s what it would be. Consider, for instance, the roof-shattering surge in demand for data and fierce migration to VoLTE networks. Now those parallel forces are clearly putting more pressure on the small incumbents of the space, as they lack the financial muscle and strategic marrow to match the larger players pound for pound. The merciless pace and moves on network upgrades and the incredible torrent of unlimited data plansare not helping them much too. In a nutshell, all this translates into an enormous pressure on a smaller player, which thus, gets either ready to be acquired or is all-packed to exit.

Now these realities are shaping into new contours for larger players – it’s an opportunity which, when missed, becomes an equivalent threat. Bharti would not be doing anything precipitous then to look at revenue opportunities among smaller players like Telenor and TTSL. The recent news of Bharti acquiring TTSL is, simply, a manifestation of these business realities. Something is afoot, and this could help Bharti get closer to its larger competitor and rub shoulders with the merged entity of Vodafone+Idea. 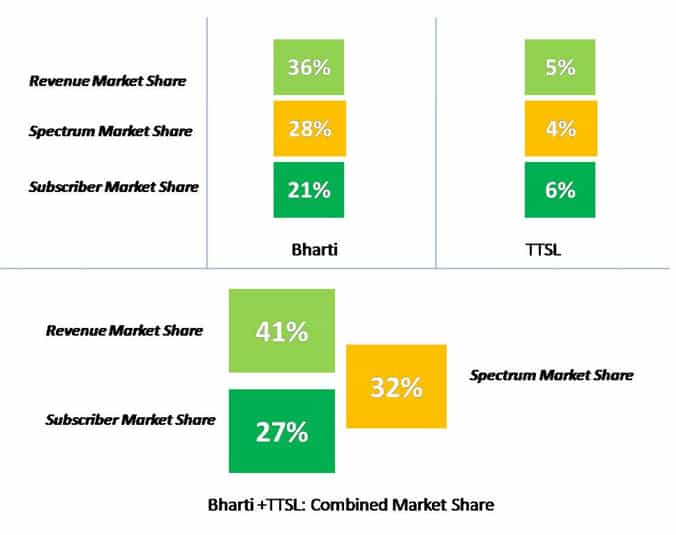 That’s quite a turn in the road. As the revenue clip gets slower, companies would have no choice but to find new ways to grow their business in a mature industry and create a new wave of growth by acquiring complacent small players with attractive and compelling assets.

It will be not be presumptuous or too early to say then that telecom industry has reached the fourth stage of industry consolidation cycle where the larger players will have to look to protect their revenue footholds by acquiring smaller companies and creating alliances to defend their businesses.

Else, they will end up hanging their boots where they least expect to.