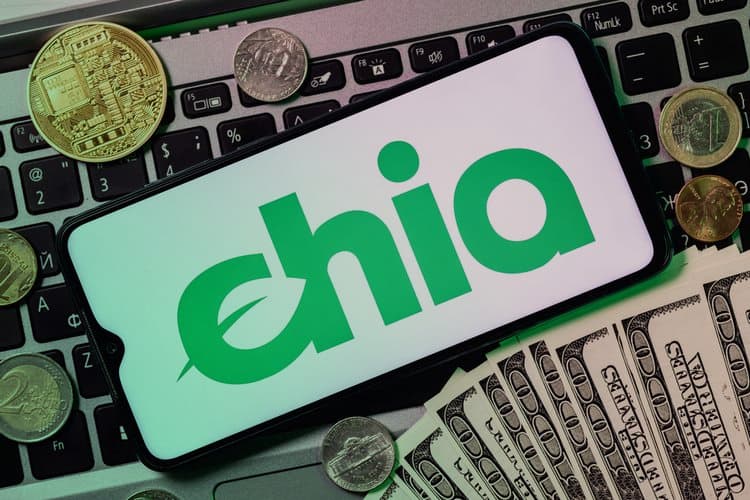 With its ‘Proof of Space’ mining concept, the new Cryptocurrency, Chia has generated huge demand for large capacity hard drives and paved way for the brands to amp up their production. Although, Chia promises to be more environment friendly, it has its own drawbacks. With this significant rise in demand, it is expected to create another serious component shortage of hard drives just like Bitcoin did for graphic cards.

The leader of the cryptocurrencies Bitcoin, is said to be not so eco-friendly owing to its extensive power and electricity consumption and its mining leaving behind a massive carbon footprint creating a negative effect on the environment.

Chia, the latest cryptocurrency will be able to solve the severe environmental impact caused by Bitcoin. Chia is said to be the first enterprise-grade digital money. The Chia Network was founded by Bram Cohen, the inventor of the well-known file-sharing system BitTorrent with a view of creating cryptocurrency that is easy to use, tough to lose, and difficult to steal. Chia is designed to use the storage capacity of a computer system and not much of its power. It uses a new mining concept called ‘Proof of Space’. It means, the free computer space in computer systems is used for holding the cryptographic plots. Large storage space increases the miner’s probability of securing a block compared to the whole network.

The Chia Network has a blockchain transaction platform called Mainnet which was launched in March this year and transactions were enabled from the month of May. Chia farming can be done by downloading the program to the computer and assigning a certain amount of storage to the network through the user interface. Chia is user friendly as it requires very basic hardware meaning it doesn’t need any specialized equipment. Its farming can be done from a laptop to a smartphone. Chialisp is Chia’s new on chain programming language that is robust, easy to audit, and safe. Chia also aims to enable rich smart transactions by endorsing latest cryptographic tools.

The basic PC components needed to farm Chia are CPU, SSD/HDD, 2.6GB of RAM for each plot, Power supply, Motherboard, GPU and finally Case/Cooling. It is said that at least 375GB of free space is needed to build a plot that occupies about 108GB when it’s completed.

The table below showcases the net space allocated to Chia network in last 2 weeks. 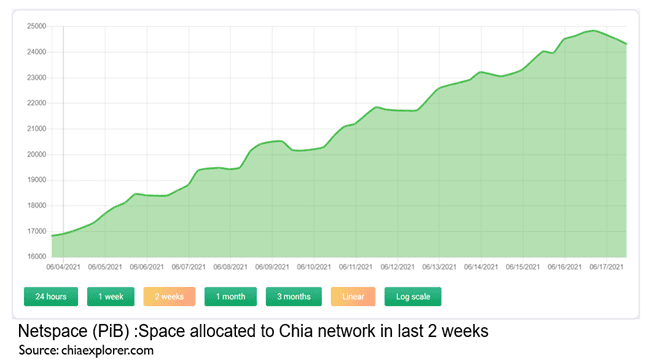 Chia mining could also force people to exceed the maximum write volume thus voiding them from product warranties. A Hong Kong-based company Galax, recently posted a notice on its website warning its users that an abnormally high data write volume due to cryptocurrency mining would void their warranty.

Asia Pacific region is said to have the large number of possible Chia miners with most of them from China. Vietnam is also witnessing hard drive shortages due to increasing trend in China. Talking about India, Chia is not yet available to buy on Indian crypto exchange. However, there are plans to launch Chia in major crypto exchanges across the globe. Recently, Europe also recorded sharp rise in hard drives demand. Thus, top brands like Seagate and Western Digital have said to increase their hard drives production in full capacity.

Above all, once Chia is launched around the world, hard drives prices are expected to shoot up further with anticipated shortages. Brands will have to increase their production volume to meet the massive demand for large capacity drives. It’s an excellent opportunity for all hard drives manufactures to capitalize on demand driven by Chia who otherwise had to reduce their HDD production due to continuous decline in demand from last few years. This in turn will also uplift their overall revenue.

With Chia promising to be the most ecological and cheaper cryptocurrency than any other options available, it will be interesting to see Chia’s performance and how fast it climbs the cryptocurrency leaderboard along with its effect on the otherwise slowing down HDD market.