Smartphone at Rs 99—Is ‘Acche Din’ Really in Store? 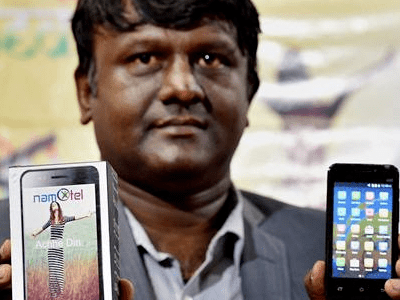 Smartphone at Rs 99—Is ‘Acche Din’ Really in Store?

If RingingBell’s smartphone Freedom 251 for Rs 251 and Docoss X1 for Rs 888 may have failed to catch your eyeballs, then here’s another gimmick, a smartphone at  Rs 99.

Last week, a Bengaluru firm Namotel launched a smartphone—Namotel Acche Din, which comes with a 4-inch HD (1280×720) display with a 2MP rear camera and 0.3MP front camera. Backed with 1325mAh battery, it is embedded with a quad-core processor with 16GB RAM and 4GB internal storage and runs on Android 5.1 and has dual SIM support.

While the specifications are very normal, its price is abnormally lower, the only aberration is–a customer is supposed to present his Aadhar Card Proof and a passport size photograph at the time of registration.

In its website, the company claims that Namotel is established in 2016 under the flagship of ‘Make in India’ and will soon expand its offices to Mumbai, Hyderabad, Delhi and Chennai. “We aim to create new business model with sustained profitability and high sales growth since the very first year of operations,” it mentions.

In smartphone manufacturing, the cellular radio is the dearer one with about 30% of the cost and the processor and rest can go up to 50%. However, in certain phones, the display could be the most expensive one. So, how come we are getting a subsidized version of the phones? Are we heading towards an era of affordability or all buzz around cheap phones going to fizzle out?

Well, the affordability era may be sinking in gradually as we expect that the consumers are adhering to a wait-and-watch approach. They are weighing the affordability options and most likely have put their purchases plans of a phone on the shelves. Numbers also indicate that there has been about 7% sequential fall in the shipments of smartphones in 1QCY 2016 as against the same period last year.

At the same time, this waiting may not be fruitful as there are chances that the cheap smartphone brands could be the fly-by night firms and this an area the government needs to come into action urgently and it should also look at the rationale behind launching a smartphone at such a cheap price.

But looking at the positive side, we won’t mind a nano car-type handset which gives consumers value for money in the long-run.