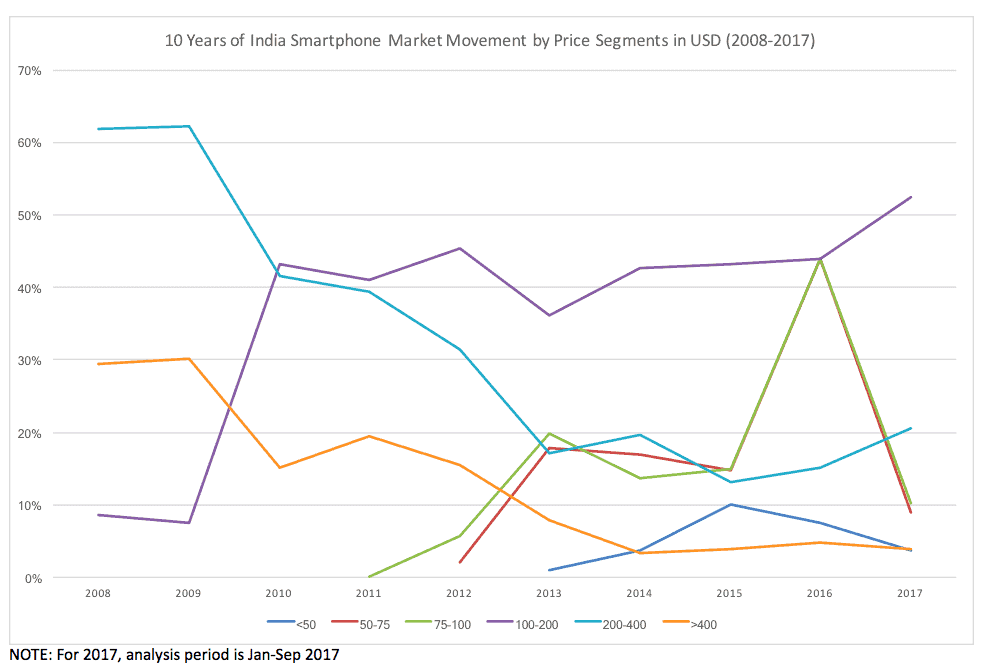 Given the current market conditions in India for smartphones, it appears that Steve Jobs, the late Apple co-founder, was prophetic: He did not consider this country a significant opportunity.

Let’s take a look at the Apple story since its entry into India in 2008. A lot has changed in the market — changes that have been favourable for consumers and the industry but, perhaps, not so much for Apple.

In the decade since its arrival, almost all the segments — barring the $100 to $200 segment — have seen a decline in the competitive and price-sensitive Indian market. But what should concern the Cupertino-based iPhone-maker is the steep fall in the $400-and-above market.

In 2008 and 2009, this segment used to account for 30 percent of the total smartphone shipments. From 2010 onwards, around the time domestic brands made their entry in the ring, helping to expand the sub-$100 category, the premium segment fell to half at 15 percent. 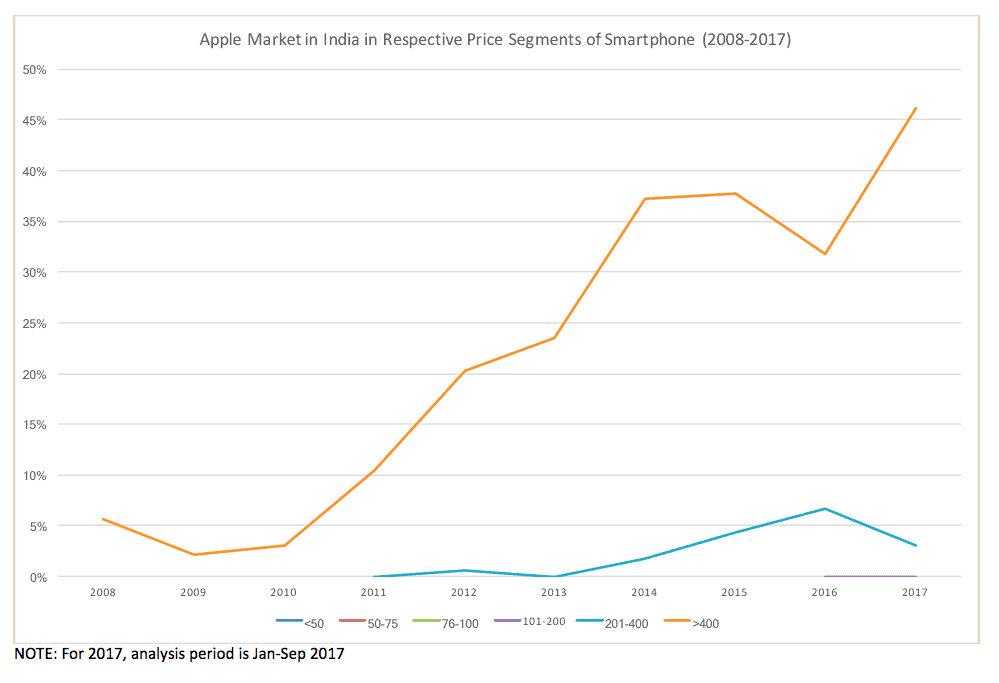 Barring a spike in 2011, the $400-and-above market has been on the decline in terms of shipment contribution. In the period, whatever growth took place in the smartphone market, happened at the lower end of the price strata.

Since 2013, the $400-plus market has been in single digits, and this is obviously not a good sign for a premium brand like Apple in India — even if the iPhone SE is taken into account, which is more of a mid-premium smartphone and is now being assembled in Bengaluru.

The big question now is: Has Apple’s poor performance in India been on account of some loose ends in its strategy? Or is it merely because of the segment/s in which the Cupertino-based iPhone-maker operates?

Let us examine the market share of Apple in the segments it operates in.

Over its decade-long presence in the country, Apple has been operating in three price segments. Among these, $400-plus has been the staple where the tech giant has performed superbly.

From just over five percent share of the segment in 2008, when Apple said ‘Namaste’ to India, it currently enjoys over 47 percent share in the $400-and-above smartphone segment by units.

In terms of revenues, Apple has also seen consistent growth despite pressures like shrinking opportunities in the premium segment as well as falling average selling prices — not the forget the “forced” downward movement to cater to the mid-premium segment. 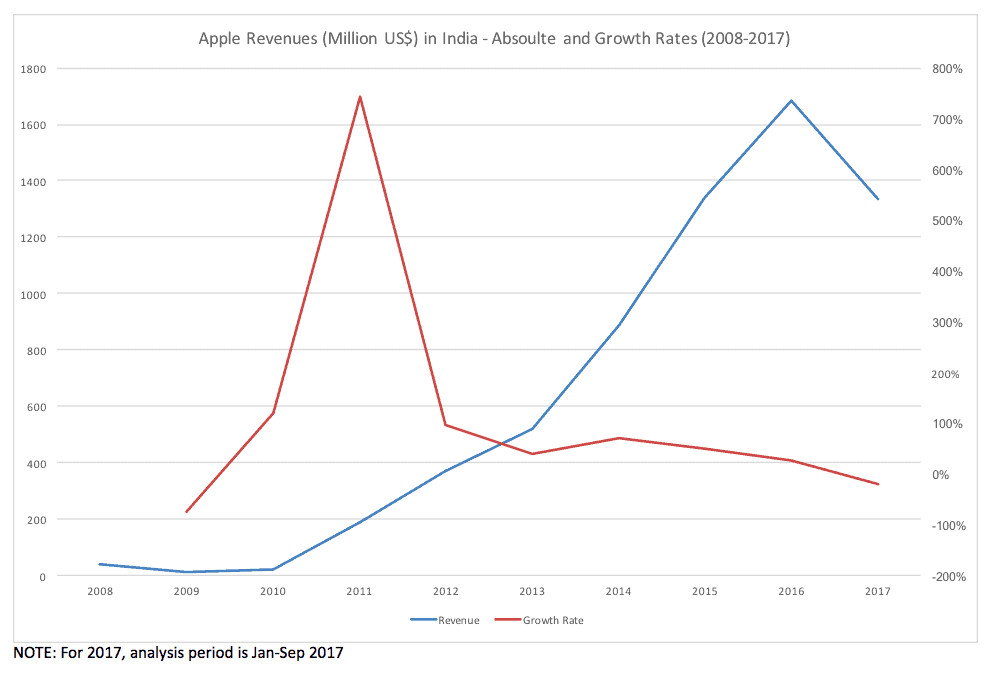 In 2017, till September end, there has been a 21 percent revenue decline compared to the calendar year 2016.

But then, Apple has witnessed good annual growth rates since 2010 — its average annual revenue growth rate has been 116 percent in its first decade of presence in India.

Both from the revenue as well as volume aspects, Apple has seen a consoling India story so far.

The real issue is the growth in the premium segment with several players, including from China, now offering devices. This segment is going to see some difficult times ahead owing to the fact that, after Jio surfaced on the landscape, the opportunity now shifts towards the entry-level players to let a user have his or her first smartphone experience.

In the era of “Desh Ka Smartphone” and “Mera Pehla Smartphone”, it would be challenging for any premium smartphone brand, including Apple, to grow like in the past.

The overall declining growth in all price segments of smartphone over the last decade or so, Apple’s consistent growth in revenues as well as its increasing growth in market share in the segment(s) it is present, has an interesting story to tell.

For Apple, revenues, as well as its market standing, is on the rise so far, as it faces the peculiar nature of the domestic market.

Was Jobs able to foresee this peculiarity of the Indian smartphone market or was his interpretation something different?

Whatever his interpretation, the impact for Apple is more or less the same.