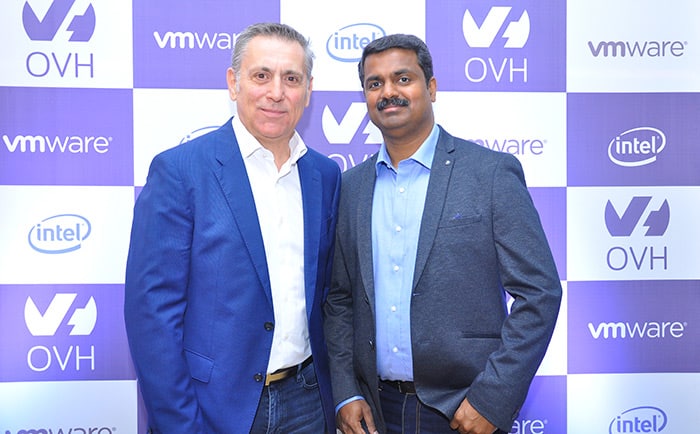 OVH, the French cloud service provider launched its operations in India recently in partnership with VMware and Intel. The player has been very bullish about the Indian market ever since. They even launched an accelerator for Indian startups recently. Under this program, the group will offer Euro 100,000 to start-ups from innovation to market for deploying solutions built on OVH’s infrastructure. The program started globally in 2015 and has already supported 1,500 startups across 120 countries.

Found in 1999, OVH has 28 data centers across 4 continents in 12 different locations. We spoke to the group’s EVP and global CTO, Alain Fiocco and India MD, Sudheesh Sudhakaran to understand how they differentiate themselves from competition, and their plans for India. Excerpts…

OVH Builds its Own Servers

India being a highly competitive market, it’s extremely important to differentiate yourself from competition. “We control the full value chain, right from building the servers all the way to delivering the services”, said Alain. “It enables us to be more flexible and faster to market with new offerings”, he added. Not many players build their own servers. On top of that, OVH doesn’t charge customers for bandwidth and uses an open source base. All this allows them to offer extremely competitive prices and one of the best price/performance ratios in the industry.

“OVH owns the full value chain, right from building the servers to delivering cloud services. The group doesn’t charge customers for bandwidth and uses an open source base, all of which allow them to offer extremely competitive prices and one of the best price/performance ratios in the industry.”

The group prides itself in being a pure play cloud infrastructure provider. Due to this, it doesn’t compete with any of its partners who build solutions or SaaS offerings on its infrastructure. However, being an IaaS only player does put the group in direct competition with players like AWS, who continuously keep dropping their prices. This is where capability and a decade of experience comes in.

“We have an edge in services that we deliver to our customers in terms of features, security, control, management, all of which is much better than most of our competitors”

The group didn’t have a data center in India as of writing this. Alain feels that they first need to understand what Indian customers need, the price points, scale, etc. Till then, they have a data center in Singapore that’s only 10 ms away. To start with, OVH is trying to attract customers who want DR, and don’t need localization. Companies with their customer based in Europe or North America and digital native companies like startups are another key target. “These could be companies who can use our infrastructure to develop their products in the cloud and then bring it back into a production environment on-prem”, said Alain. On this, Sudheesh added, “We already see traction in terms of small players, and customers running training institutes who use private cloud environments to offer trainings to their end customers.”

Incentive for Partners and SIs

Partners would also stand to gain from what OVH offers to its customers. The same flexibility, transparency, and reversibility applies to OVH’s partners as much as customers. “We don’t compete with our partners. We provide open APIs they can rely on, along with the flexibility and resources to enable them to grow”, said Alain. The group already has some attractive offerings like VRACK, which connects public to private to on-premise infrastructures. “We believe we have a lot of technology and we’ll see how to make it interesting for our partners”, added Sudheesh.

“We have a lot of technology and we’re constantly evaluating how to make it interesting for our partners.”

Instead of competing, OVH helps its partners by providing them with experts, technology, and the APIs, to build their value add on top of OVH infrastructure. For instance, they’ve setup a managed Hadoop infra for big data for IoT applications and partnered with somebody to build the management layer and offer additional services on top of it. Another partner has taken their bare metal offering, packaged it to make it fully managed infra as a service to customers. This is particularly useful for SMEs.

OVH has some striking security features that differentiate it from others. For one, they provide a completely separated virtual network infrastructure to customers and allow them to manage it on their own. This is the back-end network that’s completely hidden and on separate interfaces.  Customers can manage it as a private network. Second, DDoS protection is provided on public interfaces by default for every customer. The group provides two-factor authentication and policy definition even for individual offerings like private cloud. On top of that, since the private cloud comes with VMware’s NSX, it already has a lot of security features embedded in it.

OVH provides data encryption with a lot of granularity, wherein customers can bring and manage their own keys for encryption. The company plans to soon provide hardware encryption modules as well that will do it at very high speeds.

OVH takes several measures to protect data for privacy considering they don’t yet have physical presence in India. For one, according to Alain, there’s complete transparency about where their customers’ data resides. The customer can choose the country to put their data.

The company is also using AI for fraud protection to protect its customers and for predictive maintenance to predict which disks or servers are susceptible to failure. In the future, the group would also provide third-party virtual security appliances, thanks to their partnership with Cisco.

OVH already offers 24×7 support with teams across Europe, Canada, US, India, etc. This will eventually come to India with Indian language support as well. Besides call-in support, OVH also helps customers migrate their workloads to cloud. “Here, we have the notion of reversibility, wherein you can move between on-prem and cloud”, added Sudheesh.  In fact, as OVH uses VMware’s technology, they can do replication with the vSphere application. “There’s cloud connect functionality that allows you to privately connect from on-prem all the way to OVH’s data center”, added Alain. On top of that, there are applications to manage VMs, transitions, etc.

Startups these days are launching innovative, compute-intensive offerings around technologies like AI, IoT, etc. This requires an underlying Infrastructure to deliver the required performance. Here again, according to Alain, OVH offers the latest technologies on their servers, which includes Intel’s latest Intel Skylake tech for CPU and MVNe for high IOPs. For companies who need in memory DB, OVH offers super high scale memory in servers. What’s more, all of this is customizable. “We’re providing GPU as well for people who want to do AI, machine learning, voice recognition, etc.” added Alain. “We’ve been first to adopt Intel Xeon scalable processors, first to bring SSDs, first to obtain persistent memory, and first to use Samsung MVNe SSDs. Now, we offer the latest generation of GPUs as well”, Alain boasted.

On top of that, there are instances where a solution won’t work on a single server (AI for instance). In this case you need multiple devices, sometimes in multiple places, and different kinds of storage, compute and network resources. OVH offers 10 Gbps, which will soon be upgraded to 25 Gbps networking capacity on the private network across multiple DCs.

While there are no external benchmarks to reflect OVH’s infrastructure performance, the group does early partnerships with most of its partner to ensure they have the latest infrastructure. This is done several months in advance to ensure that the offering is available to customers at the time of launching the service. “My team’s goal is to be the best price/performance ratio in the industry”, said Alain. In fact, a key reason for delivering on the price/performance ratio is that before introducing anything to the market, the group first uses it internally.

A Strong Player in a Growing Cloud Market

According to Alain, the cloud market is growing. Within this, the bare metal private cloud/public cloud are growing at around 30%. “We’re growing faster than this market”, said Alain. Many people thought that the bare metal market was plateauing, but that’s no longer the case. The market is re-accelerating now.

Alain said he also saw a big market shift toward containerized applications. VMs used to be the unit of conception, but it’s containers now. “We’re moving in that direction aggressively and will continue to grow in the 40-50% range in the public cloud”, concluded Alain.