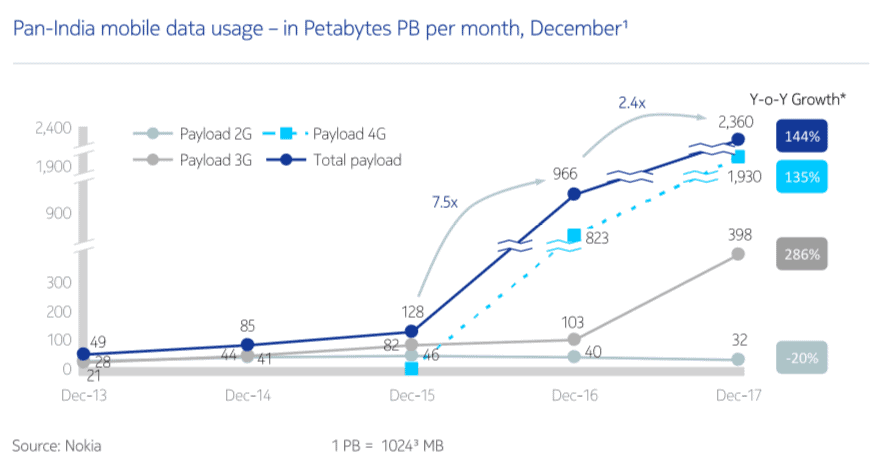 There is a need to have a deeper realistic impact assessment of mobile broadband on the Indian economy.

Keeping to its vision of being the industry barometer, the Nokia MBiT 2018 is out with some interesting findings about the state of affairs of mobile broadband in India.  There is a lot to cherish about and we as a nation should pat ourselves of achieving a lot in terms of evolving digitally on the global map.  However, there are some concerns that needs attention of all the stakeholders including the consumers.

In just less than 2 years of full scale 4G services introduced in India, there are some very encouraging achievements that should be celebrated.  First and foremost, the mobile broadband has pushed up India to 4th rank in terms of consuming high-speed internet placing India only after UK, South Korea and France in that order.  Had the mobile broadband of India not unleashed, the average data usage as well as access to high speed internet would have remained limited as just 7% of the households in India have a fixed broadband access.

The data usage has reached 11 GB per user per month towards the end of 2017.  This is result of a number of factors that has led to 4G rapid adoption in India translating in 48 times increase in total payload in 5 years (2017 over 2013).  For the same period, the increase in mobile broadband (3G + 4G) payload is 83 times.

It would be unrealistic to expect the same flight of growth considering the fact that data is either free or near free at the moment made available by challenger as well as incumbent operators due to competitive compulsions.  Anecdotally, this is similar to what was referred to ‘Coalition Compulsion’ by the then government of not taking strong economic and other reforms.  The telecom industry is undergoing the same ‘Competitive Compulsions’, which is in nobody’s interests, even the consumer in the long run. 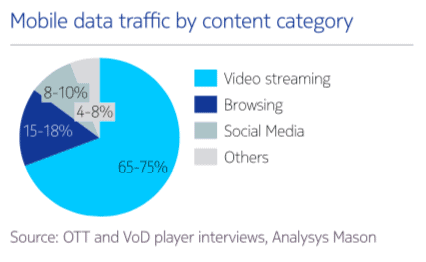 It is no surprise that video is three fourths of the form in which content is being consumed over mobile data.  That is what the broadband mobile is supposed to enable.  But on a deeper analysis of what content in the video form is being consumed, it is not only, for what 4G is.  This is primarily spanning into entertainment content which is only creating substitution offering.  For converged players like airtel, it may be only substitution in terms of delivering technology, but for DTH standalone players like Dish TV and Tata Sky, it is a competition.  So, have we invested so much of resources in making 4G happen in India only to create a substitute product and that too for a segment like entertainment?  Of course not. 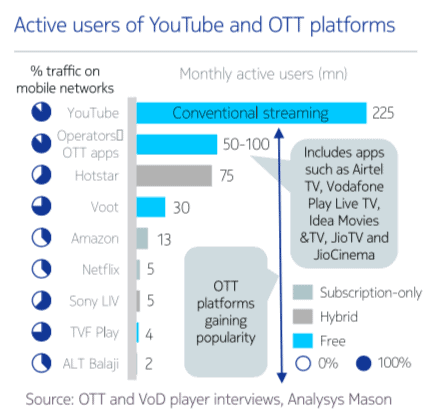 Entertainment may be the early use case by adoption and per se there shouldn’t be any issue with that.  But, the way it is currently pecking the order is superficial.  It is trending, because the data is free or near free and at the same time, content is not behind the wall requiring subscription.  Historically, content offered free has been rarely monetised later on.  If the perception around entertainment over internet is also strongly built that way, as per current trends, every value chain enabler would find it hard to monetise.  For OTT players, it might give some joyous moments in earning higher evaluation ratings, etc., to secure next cache of investments, but, churning revenues and then profitability is going to be challenging.

This leads to a series fundamental questions.  Are we digitally evolved as a nation?  Is entertainment the only use case we know of mobile broadband? Why are not apps like Byjus, Udacity, etc., figuring anywhere in consumption of data?  Where is our claim that broadband would revolutionise the social sectors of healthcare and entertainment?   Essentially, what for do we need 4G or any other generation of mobile broadband?

We may have a counter argument that 5G will actually start consuming mobile broadband in a meaningful way.  To some extent it is correct, but, going by the pattern we have so far regarding consumer data consumption, 5G shall only enable consumption of entertainment in video form in yet better specs like UHD and 4K.  Even on the M2M story so far, we have card payment machines as perhaps the single largest data consumers with over 2.5 million such devices active in the country, that was spurred after the demonetisation and push towards digital payment forms.  But, then all those machines work on 2G data and with the advent of mobile wallets, the need for such machines is also on decline.

The point here is not to paint a pessimistic view of the mobile broadband prospects in India.  What is concerning is how the data is being consumed and we all in the ecosystem have failed to create meaningful and convincing use cases for consumers.  If this trend is not arrested, all enablers shall have to keep this joy ride of offering free content over such high data networks just to increase the consumption levels without actually creating opportunities to earn.

The soon to expect NTP 2018, should dwell into this issue with a great deal of thought and we need to have a deeper assessment of impact that is being created out of the digital infrastructure being enabled.