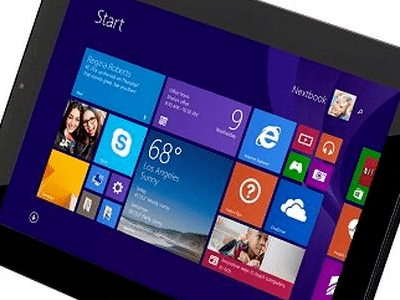 Today, I am writing a review of the Windows 8 Tablet from a user’s perspective. I will not get into whether the configuration and technical specs are correct or not, if the design and ergonomics are appropriate, or whether the pricing is OK etc. I believe that each product is designed keeping in mind a specific target audience and hence decisions regarding pricing etc. are taken with this in mind. Although, in the case of Tablets there is a tendency to compare low cost devices with a high end premium Tablet, this practice is fundamentally incorrect, as the two are meant to serve entirely different segments. It’s almost like asking that if the Tata Nano is priced at INR 150,000 (approx US$ 2,700), why is the Jaguar or Land Rover priced at a huge premium. Incidentally, both these brands are owned by the same Indian company – Tata Motors.

I reviewed a Windows 8 Tablet for over a week in December 2012, and tried to do all the normal computing activities that I do with a Laptop PC. I was seamlessly able to migrate all my functions to the Tablet. One could argue that the same can be done on any other Tablet, but I feel there is a difference in the whole experience. The fact that I had Windows OS on my Tablet, the same as on my PC, was a big advantage. I have been using Windows 8 on a Laptop PC, a non-touch device, so was well versed with its Metro tile interface.

If I had to list down things that disappointed me while using the Windows 8 Tablet, I feel there are only two. The first issue I felt was with the device sound. The speakers did not deliver sufficient output to allow me to hear sounds very clearly. The second issue is the lack of availability of few relevant apps from an Indian user’s perspective. Further, since many websites are not optimized for mobile devices including Tablets, I had difficulty in browsing some of the navigational elements of websites, for instance, with the LinkedIn log out drop-down menu. Had there been an app for LinkedIn available on the Windows 8 Store, I would have cherished using it. Similarly, very few newspapers and portals from India have created mobile apps. This lacuna can perhaps be overcome over a period of time, as capacity to deliver local language content and apps on mobile devices is built up in the country. At the same time, I can definitely understand that the number of apps don’t really mean much.  I use Android devices regularly and never really felt ‘handicapped’ for lack of finding a particular app.  So, whether its 100,000 apps on the Windows Store or 500,000+ apps each on the Apple Appstore and Google Play, these are all large numbers for an individual device user. Normally, a mobile device user does not go beyond using more than 50 apps, and these are largely available on the Windows Store as well.

Overall, it was a comfortable experience using a Windows 8 Tablet. Getting the Windows experience on a Tablet form factor is definitely something that hits the right cord. It allowed me to enjoy the experience and interface that I am used to for the past many years, that too on one of the most Aspirational form factors today – a handheld Tablet PC.