Implications of 13-digit M2M numbering plan for Telecommunications in India 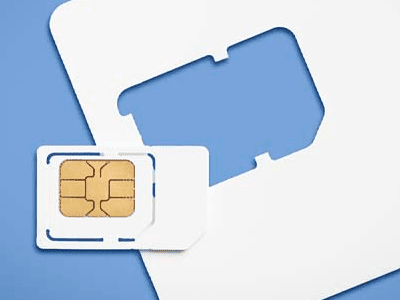 Implications of 13-digit M2M numbering plan for Telecommunications in India

With a BSNL notification to its vendors circulating across social networking, the momentum around implementation of 13-digit numbering approved for M2M devices is on the rise.  Just to set the context right, DoT had already issued 5 blocks of 3-digit M2M identifiers starting with number 5 (559, 575, 576, 579 and 597) in July 2016.  Later, TRAI was also in agreement that the numbering addressed by DoT is adequate as was reported in its recommendations report, “Spectrum, Roaming and QoS related requirements in Machine-to-Machine (M2M) Communications” published in September 2017.  What has happened recently was that DoT held a meeting in January 2018, deciding the implementation roadmap starting off with 1st July 2018.

With the adoption of 13-digit numbering plan for M2M applications starting with 5 3-digit identifiers, there would be capacity of 50 billion M2M SIMs to be issued in India. This is huge sufficing a scenario where the entire population of the country would be using 45-50 devices on an average.

On a lighter note, one might want to know how DoT arrived at these 5 3-digit random blocks; but that is universal to technology while numbering models, etc.

Considering, the attention the widely circulated notice from BSNL to its vendors, this note decodes what it means to telecom in India.

Considering description of M2M applications as listed by Telecom Engineering Centre (Figure 1), a lot many existing ‘loose’ M2M implementations are routed through a Smartphone that has a SIM issued to a user, human being.  For instance, navigation, as one of the M2M applications identified under Automotive/Transportation industry/vertical.  At present, all Radio cabs like Ola and Uber in India are using a Smartphone for navigation purposes.

In a basic car automation scenario, navigation is among the first features that such car would have.  As the Indian auto industry also gears up for connected cars, we may see them coming out with specialised models of cars that could be used as cabs, particularly radio cabs. In such a scenario, all such connections issued in an individual subscriber’s identity for normal human communication requirements would be now profiled as an M2M connection.

Similarly, SIMs used for card payment machines to enable cashless payments, are also M2M applications.  Under present subscriber reporting structure, these SIMs will also get counted as any other and would be counted as users by operators and the regulator, TRAI.

India has over 2.5 million Card Payment Machines, 1 million Radio Cabs and 1.5 million other such devices where a SIM is used for transmitting data.  These would include fleet and vehicle tracking, wearables with an independent SIM slot as well as Surveillance Cameras with cellular connectivity.  Then there are also app-based businesses like Swiggy, which would be having over 200,000 (conservative estimates) delivery boys using Smartphone for navigation.

The actual number of devices with a SIM slot in India is estimated to be around 7-8 million. However, of these, approximately 5 million, primarily Swipe Machines and Radio Cabs are using cellular connectivity for data transmission.  Use cases like Radio Cab, might be considered a diluted M2M as the device, Smartphone, is not transmitting data only to a predefined API and it could be used for other applications as well as voice communication by the cab driver.  However, in predominant cases, the drivers use the Smartphone and the attached SIM for navigation only.  Also, though by convention, M2M is a data application only, in some cases, voice is also allowed as demanded by the use case. 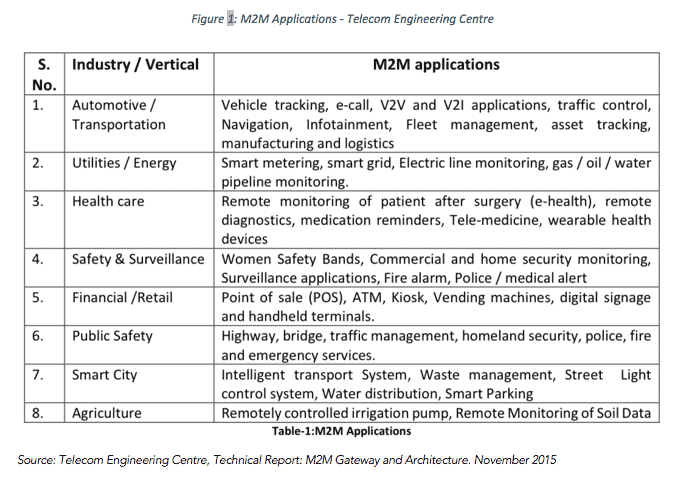 A number of applications at present are using the generic subscriber SIMs for M2M applications when seen in a broader perspective.  For instance, Radio Cabs and Card Payment Machines to identify a few. Radio Cabs use a SIM issued in the driver’s name which is priced similar to that of any other subscriber.  However, the application is actually a business use.  The commercial services are always priced on a different matrix compared to individual subscriber services.  This is a potential revenue loss for the operators.  The newly launched RJIO had figured this and introduced daily usage cap in terms of free calls a person could make each day.  They used the parameters like how many numbers were called from such connections and concluded that a genuine individual subscriber wouldn’t call those many unique numbers each day.

Now, with M2M applications having their own SIMs, the operators can price the services in line with commercial offerings and hence expect a rise in the revenues from such users who would be more or less using the services to the same extent; however, through a legitimate process after being identified as commercial users via issuing a M2M SIM. 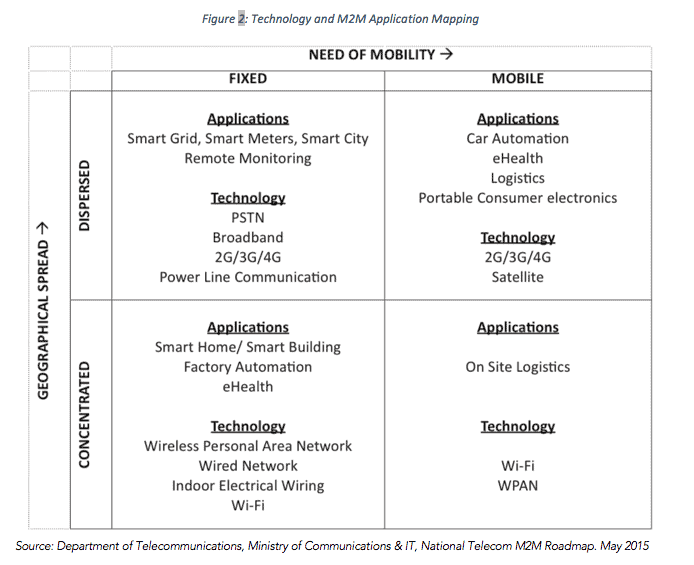 Though the upfront as well as running cost is a critical factor in deciding which technology to adopt for M2M implementation, there are other factor taken into account as well. These would include security of the platform, ease of implementation, user friendliness and other such factors.

Considering all of these, the National Telecom M2M Roadmap published by Department of Telecommunications, MCIT, Government of India, identifies Smart Grids, Smart Meters, Smart City, Remote Monitoring, Car Automation, eHealth, Logistics and Portable Consumer Electronics among others as the applications which would be suited for cellular based M2M solutions.  However, there may be an overlap as same could be achieved through other networks as well, like satellite.

Looking at how the communications enabled services to have proliferated over the years in our society and the feasibility in terms of technology and cost, it is expected that Swipe Machines and PoS Terminals, would be among first M2M cellular applications in the country.  At the same time, Radio Cabs, if, government considers that as an M2M app, shall also be among the early subscriber streams.  Other areas would be wearables and app-based businesses like Swiggy, where fleet tracking is a value proposition.

With Aadhaar now being linked with the mobile subscriber connections, whether mandatory or not would be finally decided by Honourable Supreme Court; the identity of subscriber is ascertainable with some greater degree of authenticity.  However, that is not the case with the devices.  Unless, government decides with Aadhaar for Things, achieving highest levels of authentic device profiling would be difficult.  For mobile phones the good part is that there is only one umbrella body, GSMA, that issues the IMEIs.  But, in a typical M2M or IoT scenario, there are going to be diverse products which are uniquely numbered by different agencies and authorities, sometimes international.  For instance, MAC issued by IEEE versus Car Engine Number stencilled by the automobile manufacturer.  All of these diverse number systems are only going to complicate the things as regards identifying the devices on a network.  This is essential from legal standpoint, as tomorrow it might be required to prove the distinct identity of a device in a law suit for any such eventuality.

In such a scenario, the device cannot be issued a SIM.  It shall be linked to a ‘parent’ account that would be in the name of a subscriber.  Then within that master account of a subscriber, there would be a requirement of a device profile, enlisting all the devices that would have a SIM owned or in possession of the parent user.

Now this means a lot of change in the traditional OSS/BSS structure.  In many critical apps on Smartphones, we use OTP as the authentication layer to generate a unique pairing between the application, device and the user.  How, OSS/BSS shall address this, would not be easy implementation.

It is expected for majority of the M2M applications, standard insert-able SIMs would be used.  However, it would be worth considering using eSIMs (Embedded SIMs) as well in certain applications.  This is because many devices that would be using SIMs won’t be easily accessible when the user may want to change the connectivity provider.  For instance, city surveillance camera. Such cameras would be installed on poles, walls and at other places in the city and if for any reason, it is decided by the homeland security agencies to change the connectivity provider, the process of replacing interchangeable SIMs would be cumbersome and may cause more than expected interruption in such critical 24×7 services.  eSIMs on the other hand shall give the flexibility of changing the operator remotely.

With M2M applications uptake in India, finally we may see eSIMs getting introduced in the country.

Issuing a distinct SIM with 13-digit numbering for M2M applications in India will actually set the stage for IoT in India and give us a very accurate assessment of how data is generating monetise-able use cases.  This should go long way in the strategic planning for M2M implementation in India besides helping the ecosystem catch the pulse of the industry as we move towards a connected era.