Rifle snatches by terrorists…Not to worry! DRDO Weapon immobilizers to the rescue 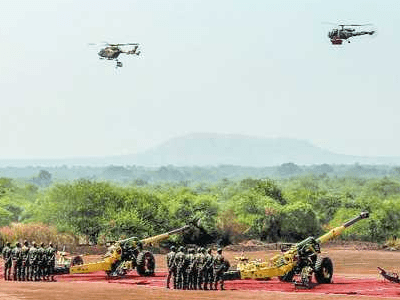 Rifle snatches by terrorists…Not to worry! DRDO Weapon immobilizers to the rescue

News clippings from Jammu & Kashmir have been replete with instances of militants’ new tactic – snatch a service rifle from an on-duty policeman/soldier, and use it to perpetrate violent crimes against innocent citizens. While there are a couple of theories going around, I am not interested in examining the imputed socio-political motives behind the rise of rifle snatches. To my mind this poses a challenge to R&D professionals working in the areas of counter-terrorism strategy and weapons design technologies. Can they make illegal snatching of light weapons irrelevant?

Well, I have a conceptual solution. But it is the technologists who have to find a viable engineering solution. I do understand that once we have the connected soldier and Soldier Area Networks are in use, such incidents would become extremely rare. But, that scenario may well take half a decade or more for India to realise. So, is there a feasible alternative that may be implemented in the short- to mid-term? Yes, I would say.

I see a lot of similarity between car thefts and the snatching of rifles. In recent years, car thefts have been overcome (or, at least minimised) with engine immobilizers, an electronic device that prevents the engine firing up, unless the correct key or token is used for security authentication.

I believe this technology can be adapted and used in rifles or other light weapons used by our security personnel, so that even if an anti-social element or a terrorist snatches a soldier’s weapon in a vulnerable area or in the heat of a violent engagement, the weapon becomes redundant. Going by the old adage, “When the going gets tough, the tough get going”, I feel we have to apply innovative techniques to nullify the pressurising of our security personnel by militants. As the law breakers resort to newer methods to achieve their violent, inhuman ends, security agency ‘think tanks’ also need to piece together ‘smart’ applications of available technology.

Thus, conceptually I see no reason for an immobilizer-like device not to be integrated into light weapons, at least for vulnerable areas so that only authorised personnel are able to use these for valid, rule-based law enforcement. Yes, technically it may present a challenge for our R&D professionals to crack. Perhaps, even more practical, would be linking an immobilizer-like device with the finger prints of the authorised personnel, but in such cases it might need to be a connected device so that a finger prints database may be accessed over a secure private cloud. This feature could be implemented in ‘Version 2.0’, but, to begin with, the device could be authenticated for a few soldier clusters so that in case of any eventuality, the next authorised personnel in the proximity could use the weapon.

I feel this could be an interesting focus area for our country’s premier R&D agencies such as the Defence Research and Development Organisation (DRDO). A working solution would deliver immense benefits where it is direly needed – the beleaguered solider on the frontlines. I am sure the brilliant minds employed by DRDO and the Indian Defence Forces can engineer a solution in a time-bound manner, giving thrust to not only controlling acts of mindless violence, but in the process giving peace a brighter chance.