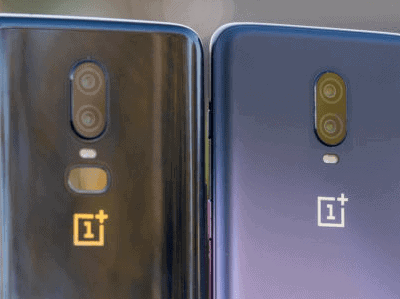 CMR is not into the business of reviewing phones as they come. But, yes..if it is something that is attempting to reshape the industry, or trying to do the things differently, does catch our attention and increases our inquisitiveness. OnePlus is one such instance.

Besides being among few being sold exclusively online, it was the first and continues to be the only ‘by invitation only’ phone. So, I decided to review OnePlus One for a pretty long time to check its performance as a daily buddy for a heavy user like me.

If I have to sum up its overall performance as far as performing all the tasks that I do – from calls to music, pictures, games, video, mails, etc. I would say it is definitely outperforming the expectations. Not that I had set my expectations low, but the phone really worked at very high performances.

The only thing that started bothering me after a month or so- is its battery which started to exhaust at a faster pace than earlier and it also started to take some extra minutes to be charged fully.

Also, I tried listening to music in car, replacing it as a car stereo, well it did heat up a lot. But, all these started to happen at least after 6-8 weeks of use.

Nevertheless, OnePlus One definitely is a superior phone with best performance for even a heavy user like me. I have really enjoyed its interactivity and customization through Cyanogen.

On the marketing side, I feel the strategy adopted is definitely hampering its sales potential in the market. Such a performing device at ‘mouth-watering’ price can actually make a lot in volumes than where it stands today.

I analyzed the data for last three quarter (since the 4G handsets became increasingly available in the market) and found out that of the top 10 brands only 6 have been consistently shipping in these three quarters. But, the volumes are directly co-related to two things – Number of models and the Selling mode.

Look at the graph below derived from CMR’s data on India 4G Mobile Handsets. It is clearly visible that as the vendors went on adding new models to their kitty the volume of shipment grew. Barring HTC, all brands have grown in volumes as they increased their models and it is proportionate. For instance, Samsung increased their models from 5 to 9 in three quarters, and its share by volume also increased from 17% to 38%. Similarly for Lenovo, from having just one model -an addition of another seven models during the period impacted their market share from 3% to 28% during these three quarters. 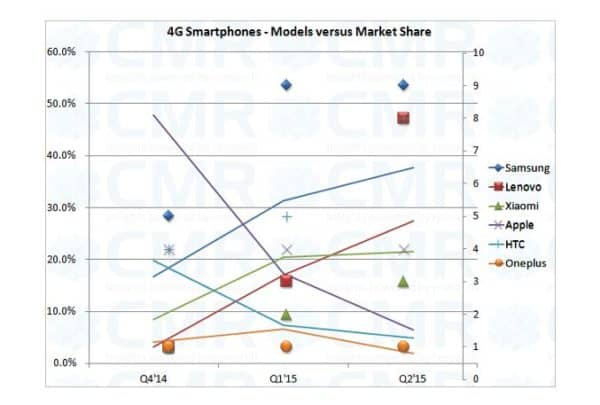 But, for OnePlus, it had only one model -OnePlus One, and it saw a decline in its market share from 4.2% to 1.9% towards the end of the period. Though, it has added one more model lately, but perhaps it needs to give more options to the prospective customers.

At the same time, OnePlus is the only brand among these 6 consistently performing 4G Smartphone players, which is selling online only. Xiaomi recently announced plans to add offline channels. This is one more weakness in the strategy of implementation for OnePlus, which otherwise has an excellent performing device available.

The company might argue that it wants to be different from the others in the crowd, but you cannot be so at the cost of impeding your sales. So you have to work on an excellent strategy matching your portfolio. That’s the last point from me to share.

Wishing you all the best for One Plus Two, but make an effective marketing and selling programme matching its performance as well.