Smartphones account for over 20% of total sales; Featurephone as well as Smartphone segments grow more than 100% QoQ

Dhaka / New Delhi: According to CMR’s Bangladesh Quarterly Mobile Handsets Market Review, 3Q CY 2014 report released today, Bangladesh continues to show consistent growth in both the featurephone as well as smartphone segments. This is among very few South East Asian markets where growth is seen in both segments.

Commenting on the results, Tanvi Sharma, Analyst, Bangladesh Telecoms Industry at CMR, said, “Comparing the results of 2014 with 2013, the impetus to the market is mainly from the Smartphones segment, as compared to the Featurephones segment, although the latter has also recorded healthy growth. Sales of Smartphones grew more than three times vis-à-vis the same quarter last year, indicating the strong opportunity that this market is throwing up for handset vendors, TSPs and solution providers. It is also an opportune time for local brands such as Symphony Mobile and Walton to leverage on the growth prospects.”

Symphony Mobile is the overall leader in the Bangladesh Mobile Handsets market with its major strength being the vendor’s commanding position in the Smartphones segment. While Symphony Mobile’s share in the overall Bangladesh Mobile Handsets market is 36% in terms of unit shipments, in the Smartphones segment its share is a little over half of the market with a 53% share. 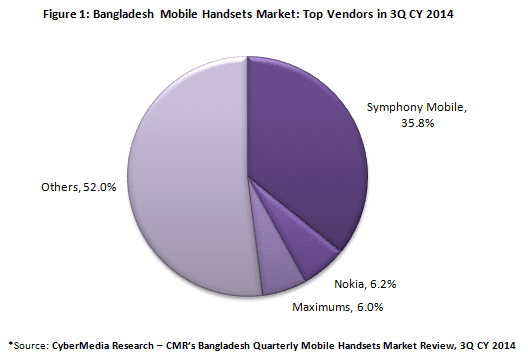 Across the overall Bangladesh Mobile Handsets market as well as the Smartphones segment, Symphony Mobile, Walton and Maximus are the local brands with leadership positions, while Nokia and Samsung are the only ‘Tier 1’ international brands with a significant presence. 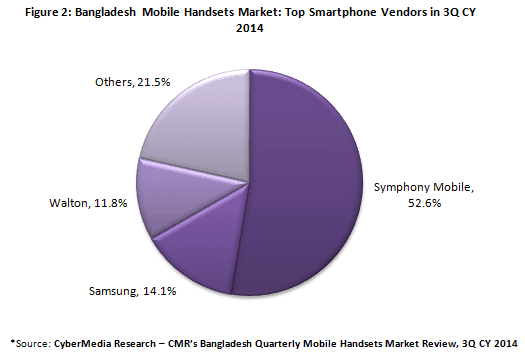 Commenting on these results, Faisal Kawoosa, Lead Telecoms Analyst at CMR, said, “Now as the Bangladesh Smartphones market continues to show strong growth, it will be increasingly challenging for Symphony Mobile to retain its share. A big and growing market opportunity is always eyed by many! At the same time, what worries me is the poor performance of Indian mobile handset brands. While they have been doing extremely well in the India market, players like Micromax, Karbonn and Lava do not figure in the top three positions in any of the Bangladesh Mobile Handset segments. To my mind, these players need to take a closer look at their market entry and penetration strategies and address the gaps in roll-out, if any.”