Reliance Retail’s JioPhone has successfully been able to create a new category of Fusion phones in India: CMR 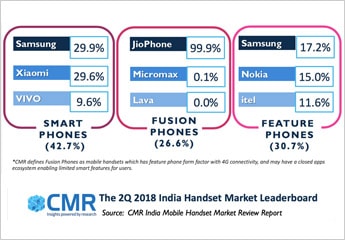 Commenting on the major trends witnessed, Prabhu Ram, Head – Industry Intelligence Group (IIG), CMR said, “In 2Q 2018, with the ushering in of the CKD level manufacturing, there are two broad trends underlining short-term turbulence. These include, the impact of Jio’s disruptive Monsoon offer leading to erratic demand projection estimations for all major handset brands, and secondly, the capabilities of smaller players to switch to CKD manufacturing and maintain production levels with their own SMT lines.”

“In 2Q 2018, Samsung’s continued brand loyalty in India paid dividends with its new refreshed portfolio enabling it to trump Xiaomi in the cut-throat smartphone competition. Whether it be the new rich features, camera or screen innovations, they all helped it in making dents. In line with predictions made by CMR earlier, smartphone brands, HTC exited from the India Market in 2Q 2018. On the other hand, it is remarkable to note that ASUS scripted a positive turnaround, on the back of a revised market strategy and astute stewardship,” Prabhu stated.

As per Narinder Kumar, Lead Analyst, IIG-CMR, “2Q 2018 saw the arrival of Fusion phones as a distinct category. Though it is primarily driven by JioPhone, Indian brands like Micromax and Lava are also shipping in smaller quantities.”

“Going forward, it is expected that other brands shall also explore Fusion phones and excite the consumers with enriched smart capabilities within the feature phone form factor.  However, the success would like in how it penetrates into the open market, albeit telecom operators supporting the initiative, Narinder concluded.”

The CMR Mobile Handset Review Report is based on CMR’s research methodology and proprietary tools, covering >100 unique datasets, and delivered to CMR clientele. The report is available in monthly, quarterly and half-yearly formats. The report deliverables include top-line findings and summary snapshot for India market in powerpoint, and in a user-friendly excel format.For more information on CMR’s Mobile Handset Report, please contact Prabhu Ram at +91 9899440380 or pram@cmrindia.com