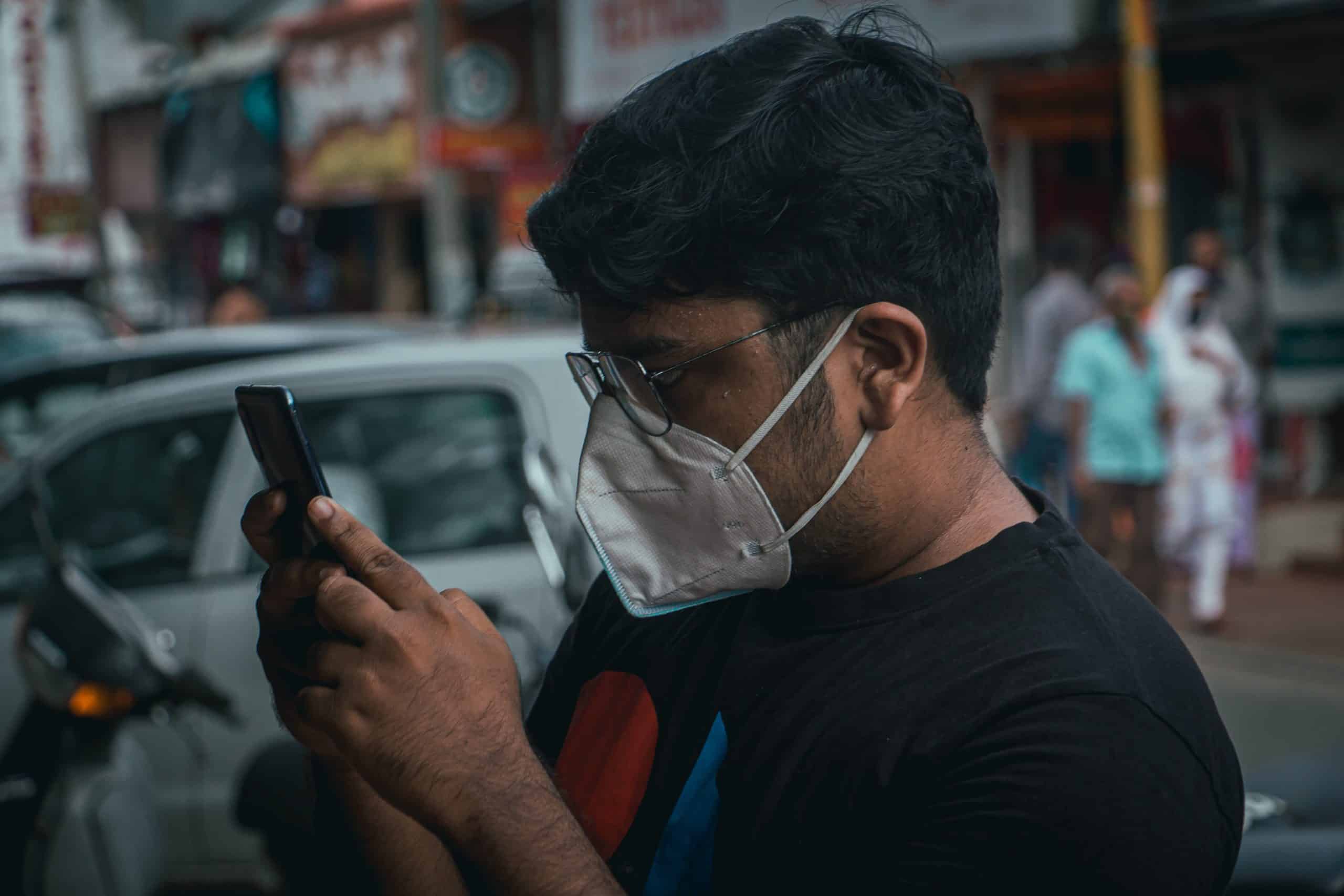 According to Shipra Sinha, Analyst-Industry Intelligence Group, CMR, “Q1 2021 recorded the highest ever shipments in three years. It also marked an extended good run for the smartphone market, on the back of continued pent-up consumer demand driven by continued everything-from-home context. Xiaomi remained on top in smartphone shipments, and POCO’s remarkable growth bodes well for Xiaomi. It is facing tough competition from the likes of Samsung and vivo. During Q1, OPPO continued to build on its growth momentum, with new 5G-capable offerings.” 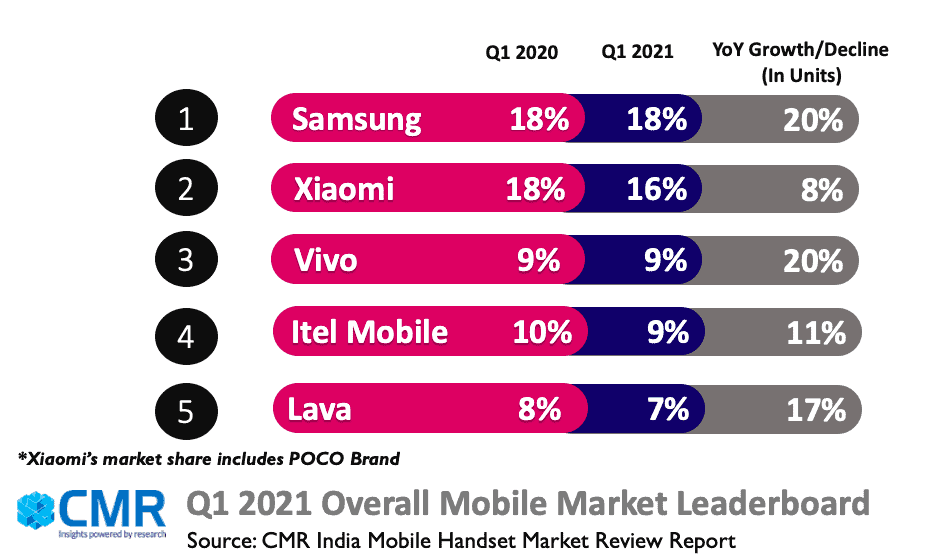 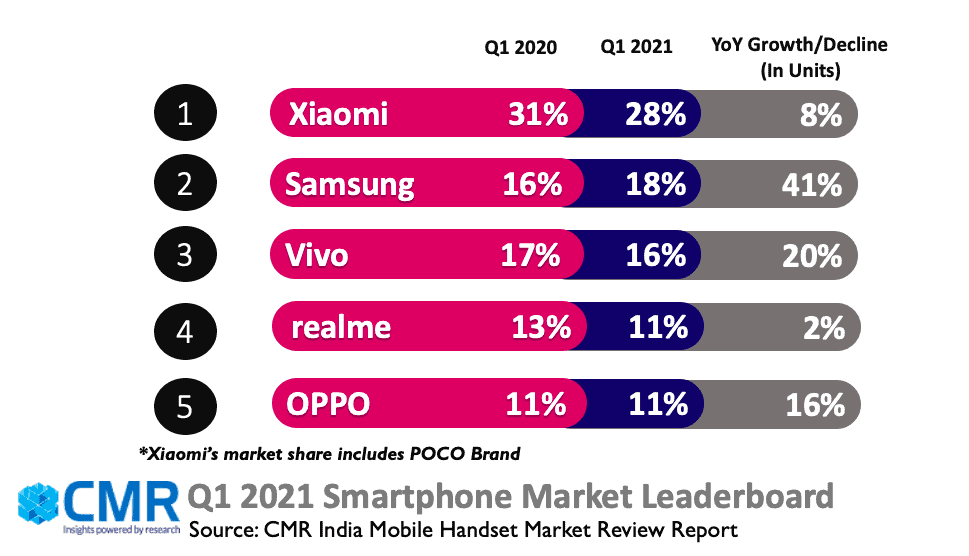 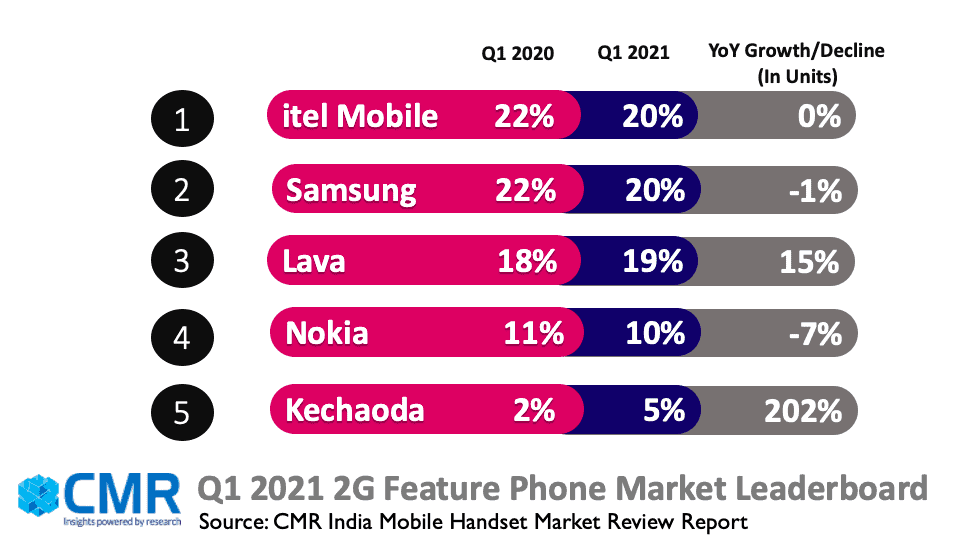 Xiaomi captured the top spot with 8% YoY growth in shipments. Redmi 9A and 9 Power together accounted for 38% of its overall shipments. Xiaomi refreshed its 5G lineup with its most affordable 5G handset Mi10i and introduced 10th generation Redmi Note series. POCO had a whopping 467% YoY growth in Q1 growing from a small base. The Poco C3 accounted for 28% of its shipments. POCO launched M3 and X3 pro in Value for Money segment.

Samsung grew 41% YoY, and with an 18% market share, was placed second in the smartphone market.  It launched atleast 12 new models with the Samsung A12, A32, A52 and A72, accounting for close to 25% of its shipments.  In the featurephone segment, Samsung stood at second spot with 20% market share.

Vivo garnered 16% market share, with its shipments growing by 20% YoY. It launched 7 models including the vivo X60 5G series in the premium and super premium smartphone segment. The vivo Y51A, Y20a and Y12s constituted almost half of its sales.

realme shipments recorded negligible 1.5% YoY growth, mostly driven by the realme C12, Narzo 30A and Narzo 20 series contributing 26% of its share. realme continued to drive 5G smartphone accessibility and affordability by introducing the Narzo 30 Pro 5G in the sub 20,000 segment.

OPPO grew 16% YoY almost dethroned realme with 11 % market share each. In Q1 2021, it debuted its OPPO Reno 5G model, and introduced the OPPO F19 Pro Plus and F19 Pro. OPPO A15 series constituted more than a third of its shipments.

OnePlus shipments recorded a significant growth of >400% YoY, almost touching a million shipments. OnePlus debuted the new OnePlus 9 Series during the quarter. OnePlus Nord continued its good run and accounted for 37% of its shipments.

Apple stood at the 8th position in the top ten leaderboard in Q1 2021. Apple iPhone 11 and iPhone 12 models together accounted for 71% of its overall shipments.

In the 2G feature phone segment, while Nokia and Micromax declined by 7% each, Lava shipments increased by 15% YoY.

As per CMR estimates, driven by lockdown restrictions across Indian states, the smartphone market will face a significant growth challenge in Q2 2021 and beyond.